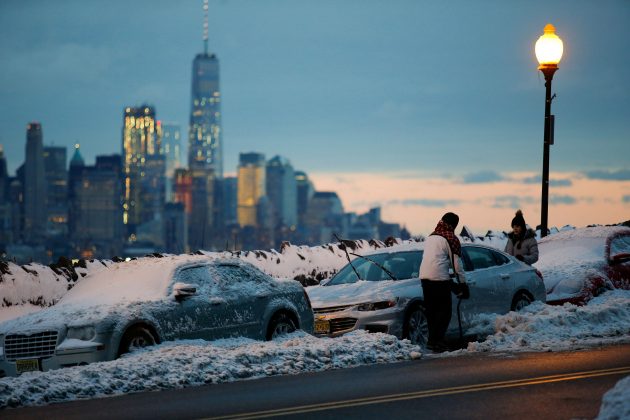 Residents clear their cars and street of snow in Weehawken, New Jersey, as the One World Trade Center and lower Manhattan are seen after a snowstorm in New York, U.S. March 14, 2017. REUTERS/Eduardo Munoz

(Reuters) – A late-season snowstorm that swept the mid-Atlantic and northeastern United States began to weaken on Wednesday after killing six people, grounding thousands of flights and closing schools.

Still, millions of people on the East Coast faced temperatures 10 to 25 degrees below average, wind gusts of 30 mph (50 kph) and slick roads and sidewalks as they returned to work and classes on Wednesday.

“Residual snow and slush will refreeze early this morning, resulting in hazardous conditions,” the National Weather Service said in an advisory, urging those who ventured out early to use extra caution.

The rare mid-March “nor’easter” was tapering off over upstate New York and northern New England after dumping as much as a foot (30 cm) of snow with gale-force winds throughout the region on Tuesday, the weather service said.

As life returns to normal for many, students in Boston Public Schools will have the day off while the city and surrounding area continue to dig out from heavy snowfall.

On Tuesday, snow fell from the lower Great Lakes and central Appalachians to the Eastern Seaboard and as far south as North Carolina.

Some cities, such as Washington, D.C., and New York, got just a few inches of snow, far less than the anticipated amounts that forced public officials to close schools, stop commuter trains and warn people to stay indoors on Tuesday.

Governors in New York, New Jersey, Pennsylvania and Virginia declared states of emergency before the storm.

“Mother Nature is an unpredictable lady sometimes,” New York Governor Andrew Cuomo told a news conference on Tuesday. “She was unpredictable today.” More than 6,000 commercial airline flights across the United States were canceled for the day, said tracking service FlightAware.com. Utility companies said more than 220,000 homes and businesses were without power at the storm’s peak.

Six weather-related fatalities included the death of a 16-year-old girl in a single-car crash in Gilford, New Hampshire, according to the city police department.

The storm capped an unusually mild winter, with otherwise below-normal snowfall on much of the Atlantic coast.