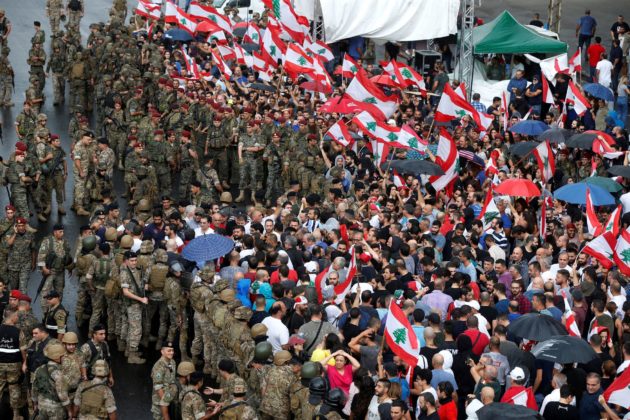 BEIRUT (Reuters) – Lebanon’s highest Christian authority called on Wednesday for a change in government to include qualified technocrats and urged the president to begin talks to address demands of demonstrators in the streets for a seventh day.

Throwing his weight behind demands for at least some change in government, Maronite Patriarch Bechara Boutros Al-Rai was the first major religious figure to wade into the crisis.

With a population of 6 million people including around 1 million Syrian refugees, Lebanon has been swept by unprecedented protests against a political elite blamed for a deep economic crisis.

Flag-waving protesters kept roads blocked around the country with vehicles and makeshift barricades on Wednesday, while banks and schools remained shut.

Prime Minister Saad al-Hariri’s government announced an emergency reform package on Monday, to try to defuse the anger of protesters demanding his government resigns and also to steer the heavily indebted state away from a looming financial crisis.

He did not demand Hariri’s resignation.

Hariri’s government, which took office at the start of the year, groups nearly all of the main parties in the Lebanese sectarian power-sharing system.

“The list of reforms is a positive first step but it requires amending the ministers and renewing the administrative team with national, qualified figures,” Rai said in a televised speech.

“We call on the president of the republic … to immediately begin consultations with the political leadership and the heads of the sects to take the necessary decisions regarding the people’s demands,” Rai said.

The president is drawn from his Christian Maronite community.

Political sources said a reshuffle was being discussed. One told Reuters the idea of a change in government was “starting to mature”. “But it is not there yet. Not everyone is at the same state of emergency,” the source said.

Lebanon’s unrest is the latest in a flare-up of political protests around the world – from Hong Kong and Barcelona to Quito and Santiago – each having its own trigger but sharing some underlying frustrations.

Lebanese army troops scuffled with demonstrators on Wednesday as they struggled to unblock main roads.

Parliament Speaker Nabih Berri, a Shi’ite Muslim, said Lebanon could not remain in such chaos and said he feared any power vacuum.

“Everything the political class is doing now is clearly to buy time … the reform list is a lie. Today the demand is for the government to fall,” said Manal Ghanem, a protester at a barricade in Beirut.

“We want to get an interim government that holds early elections … We need to stay strong, to stay in the streets,” said Ghanem, a university graduate who works in a coffee shop.

Lebanon’s economy, whose mainstays include construction and tourism, has suffered years of low growth linked to regional turmoil. Capital inflows from abroad, critical to financing the state deficit, have ebbed.

Lebanon has one of the world’s highest levels of public debt compared to the size of its economy at around 150%.

The powerful Shi’ite group Hezbollah, which is backed by Iran and heavily armed, said on Saturday it was against the government resigning and the country did not have enough time for such a move given the acute financial crisis.

The moves announced by Hariri on Monday included the halving of salaries of ministers and lawmakers, as well as steps toward implementing long-delayed measures vital to fixing state finances.

Under pressure to convince foreign donors he can slash next year’s budget deficit, Hariri has said the central bank and commercial banks would contribute 5.1 trillion Lebanese pounds ($3.4 billion) to help plug the gap, including through an increase in taxes on bank profits.

Hariri met Central Bank Governor Riad Salameh on Wednesday following his return from Washington, where the governor attended International Monetary Fund (IMF) and World Bank meetings. He also met a delegation from the Association of Banks in Lebanon.