By Renee Maltezou and Alkis Konstantinidis

MATI, Greece (Reuters) – Sorrow became tinged with anger in Greece on Thursday as rescuers searched scorched land and the coastline for survivors, three days after a wildfire destroyed a small town outside Athens and killed at least 83 people. 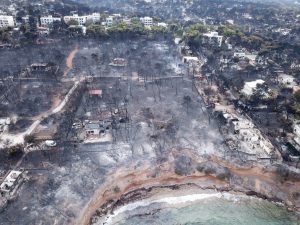 Desperate relatives appeared on television to plead for information on those missing, while other residents of Mati asked why authorities had been unable to prevent so many of their neighbors from getting trapped by a wall of flame in streets with no exit route.

“This shouldn’t have happened, people perished for no reason,” a tearful woman shouted at Defence Minister Panos Kammenos as he visited the town and nearby fire-ravaged areas. “You left us at God’s mercy!”

With the toll from Greece’s deadliest wildfire in decades expected to rise further, about 300 firemen and volunteers combed the area for dozens still missing.

One woman was looking for her brother, who had been returning from work when the flames took hold. “My father was the last person to talk to him on Monday evening,” Katerina Hamilothori told Skai TV. “We have had no news at all.”

The cause of the fire is still unclear, and being investigated by an Athens prosecutor who is also reviewing the way it was handled.

Local officials said high and unpredictable winds would have rendered even the best-executed evacuation plan futile, though firefighters told Reuters that some water hydrants in the area were empty.

One theory being examined is that the blaze was started deliberately in three locations at the same time. 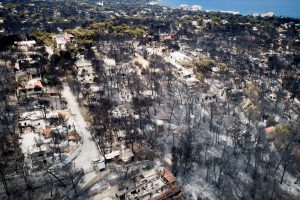 An aerial view shows burnt houses and trees following a wildfire in the village of Mati, near Athens, Greece, July 25, 2018. Antonis Nicolopoulos/Eurokinissi via REUTERS

Outside the coroner’s service in Athens, the mood was grim as relatives of victims arrived to submit information and blood samples which could assist identifications.

“This is a difficult process, more difficult than other mass disasters we have dealt with,” said coroner Nikolaos Kalogrias, adding that the bodies of most of the victims were completely charred.

About 500 homes were destroyed, and the fire brigade said there were closed-up homes that had not yet been checked.

The left-led government announced a long list of relief measures including a one-off 10,000 euro payment and a job in the public sector for victims’ spouses and near relatives. But for many, that was not enough to ease the pain.

“A drop in the ocean,” read the front page of newspaper Ta Nea.

The fire broke out on Monday at 4:57 p.m. and spread rapidly through Mati, which lies fewer than 30 km (17 miles) east of Athens and was popular with local tourists.

Firefighters described a rapid change in the direction of the wind, which also picked up speed, and some suggested the thick covering of pine trees and a mood of panic was a deadly combination that would have been hard to combat.

“The main factor was the wind, its speed and its direction. It should have been looked at earlier,” said World Wildlife Fund (WWF) Greece director Dimitris Karavellas.

“These people should have been ordered out of this area… This is the only thing that could have saved them.”