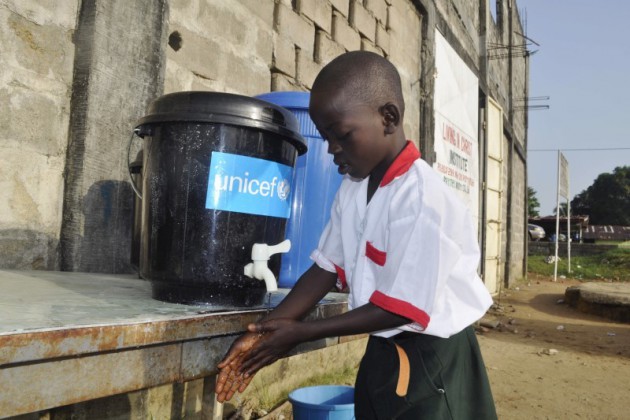 A boy washes his hands as part of Ebola prevention methods before school starts in Paynesville, Liberia, on November 24, 2015. REUTERS / James Giahyue

MONROVIA (Reuters) – Liberia was declared free of the Ebola virus by global health experts on Thursday, a milestone that signaled an end to an epidemic in West Africa that has killed more than 11,300 people.

But the World Health Organisation (WHO) warned there could still be flare-ups of the disease in the region, which has suffered the world’s deadliest outbreak over the past two years, as survivors can carry the virus for many months and could pass it on.

Health specialists cautioned against complacency, saying the world was still underprepared for any future outbreaks of the disease.

Liberia was the last affected country to get the all-clear, with no cases of Ebola for 42 days, twice the length of the virus’s “incubation period” – the time elapsed between transmission of the disease and the appearance of symptoms.

“All known chains of transmission have been stopped in West Africa,” the WHO, a U.N. agency, said on Thursday.

The other affected countries, Guinea and Sierra Leone, were declared Ebola-free late last year. There were cases in seven other countries including Nigeria, the United States and Spain, but almost all the deaths were in the West African nations.

“It is the first time since the start of the … epidemic in West Africa two years ago that the three hardest-hit countries had zero cases for at least 42 days,” said WHO’s Liberia representative Alex Gasasira.

The WHO announcement on Thursday is a major step in the fight against a disease that began in the forests of eastern Guinea in December 2013 before spreading to Liberia and Sierra Leone. It overwhelmed medical infrastructure in the region which was ill-equipped to deal with the outbreak, and at its height in late 2014 sparked global fears among the general public.

However the agency urged caution – Liberia had previously twice been declared virus-free, in May and September of 2015, but each time a fresh cluster of cases unexpectedly emerged.

Its capital Monrovia was badly hit during the worst of the epidemic. Inadequate care meant patients lay strewn on the streets or pavements waiting hours for tests and treatment; medical holding pens became growth centers for the disease.

With those memories still fresh, and society and the economy still reeling from the outbreak, the reaction to Thursday’s announcement was muted. There was no signs of celebration such as the “Ebola free” T-shirts that people wore after previous WHO announcements.

“After the first declaration, people were dancing in the street,” said Vivian Lymas Tegli, child protection officer for UNICEF in Monrovia. “But I don’t think there will be any celebrations today. People are tired of Ebola. They feel it is here to stay.”

Experts said progress had been made in the region’s response to Ebola, with new cases having dwindled due to public health campaigns, efforts to trace and isolate potential sufferers and the safe treatment and burial of patients and victims.

But it said the countries would still struggle to deal with any future large outbreak of Ebola, which is passed on through blood and bodily fluids and killed around 40 percent of those who contracted the virus.

Hundreds of healthcare workers in both urban and rural communities were among those killed by the disease, a major blow to medical systems in countries which already had among the lowest numbers of doctors per head of population in the world.

“Today’s WHO announcement is welcome news but we must learn from Ebola’s devastating impact and ensure we are better prepared for infectious disease outbreaks,” said Dr Seth Berkley, head of Gavi, the Vaccine Alliance, an organization that aims to increase access to vaccines in poor countries.

“The world is still worryingly underprepared for potential future health threats and a change of mind-set is required to ensure we invest in research and development today to protect ourselves in years to come.”

Experts also warned other tropical diseases posed future threats, including the previously little known mosquito-borne Zika virus, which has been linked to head-related birth defects and is spreading in South America.

Hilde de Clerck, a doctor with Medecins Sans Frontieres who has assisted with five Ebola outbreaks including in Congo, Uganda and the latest epidemic in West Africa, said vigilance was crucial to prevent the re-emergence of the disease, for which there is no proven drug treatment, although researchers have developed a vaccine.

“I think we should not forget about the risk of other outbreaks,” she said. “I am most concerned about some of the basics: hygiene, equipment and training.”

While WHO and other health specialists say another outbreak of this magnitude is unlikely, and much has been learned in terms of monitoring patients and responding to outbreaks, problems remain, including with simple hygiene, such as not washing hands.

“I do really believe that there is a much better understanding, an acceptance that this is a real disease, and what the cause is of this disease, and that is much more embedded in society than before,” said Peter Graaff, head of Ebola operations at the WHO’s headquarters in Geneva.

Mohammed Kamara, who lives in Monrovia, lost two relatives and a friend to Ebola in 2014. “I know exactly what it means to have the disease in the country,” he said.

“We must be grateful to God and then to the government and its partners for the country to be declared free of Ebola. I only hope that it is the last time that we experience Ebola.”