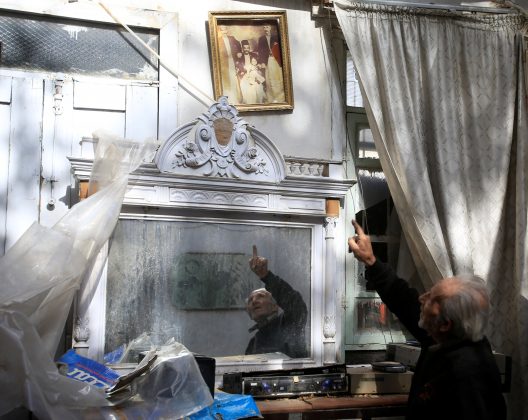 JOBAR, SYRIA (Reuters) – Muhammad al-Masri spent the Syrian war in a house the 75-year-old described as being on the frontline with death.

In his partly roofless, cobweb-filled house on a government frontline with the formerly rebel-held eastern Ghouta district of Jobar, al-Masri stayed put through years of conflict.

“Many said I was crazy … Everyone fled.”

But since the fighting ended three weeks ago, a trickle of life has returned to the war-ravaged, deserted streets around him.

The Syrian government, backed by Russia and Iran, regained eastern Ghouta, an area of farms and towns just outside Damascus, in early April in a ferocious assault.

The army offensive to capture it, heralded by one of the heaviest bombardments in the seven-year war, killed more than 1,600 people, said the Syrian Observatory for Human Rights, a war monitor.

Today the boom of mortars around al-Masri has been replaced with voices.

“Listen!” he says, as the sound of girls singing a traditional Syrian song reached him. “Life has returned to the neighborhood!”

Former residents are starting to come back, hoping to see what years of grinding warfare have done to their homes.

Near al-Masri’s house, soldiers yell at children and teenagers to stop exploring the barricades, trenches and war debris which had previously been off limits to them.

Most of the Jobar district is still uninhabited. Classified as a security zone by the Syrian army, the streets are strewn with destroyed buildings, bullets and explosives.

Underground, the army is still discovering a network of tunnels used by eastern Ghouta’s fighters and smugglers during years of siege.

Al-Masri’s house was the last inhabited position in his neighborhood before a bank of earth marked Damascus’s frontline with Jobar.

The house, shared at times with his son and daughter-in-law, was shelled three times. Shrapnel injured his son on one occasion.

“The mortars fell while I was inside. I didn’t leave. We cleaned up and sat back down,” he said.

“I lived here alongside death and didn’t die.”

His house was surrounded by Syrian government security forces who would bring him his food. He spent his days sweeping war debris from streets around him, watching television and telephoning family.

In the early days of the conflict he was scared and unsure of what might happen.

“For more than a month I slept with my shoes on, on full alert.”

Although Damascus has remained largely peaceful during the seven-year conflict, the proximity of formerly rebel-held areas like Jobar to the capital means rockets sometimes killed and injured people in the city.

“I didn’t take a single step from here. Not at night, not during the day. There was just 10 meters between me and the tanks. I was the only one in this area, no other buildings, no nothing. Me and the army were like brothers,” he said.