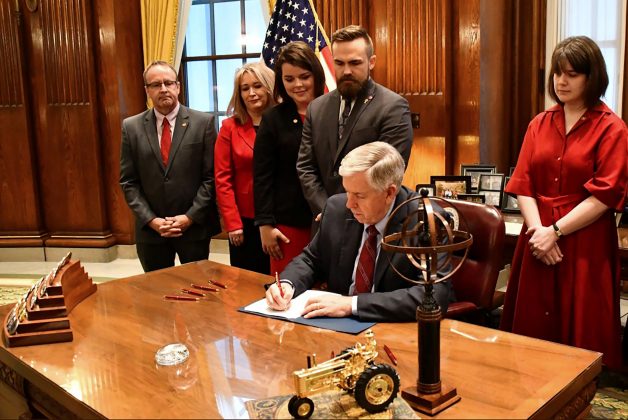 By Gabriella Borter and Alex Dobuzinskis

(Reuters) – Louisiana’s Democratic governor said on Wednesday he would sign a bill passed earlier in the day to ban abortion when a fetal heartbeat is detected, the latest legislation in a movement in mostly Southern and Midwest states to curb abortion rights.

Earlier on Wednesday, Missouri’s governor renewed his intention to close a Planned Parenthood clinic and become the first state without a medical facility that performs abortions.

The Louisiana bill was approved on Wednesday by a 79-23 vote of the Republican-controlled Louisiana House of Representatives and had already passed in the state Senate.

Louisiana would join at least four other conservative-leaning states that have passed measures this year to prohibit abortion as early as six weeks. Alabama has approved a stricter law that would ban nearly all abortions in the state.

The U.S. Supreme Court may eventually be called upon to rule on the various state laws, which challenge the high court’s landmark 1973 Roe v. Wade decision that women have a constitutional right to an abortion.

Louisiana Governor John Bel Edwards would become the first Democrat this year to sign a ban on abortion when a heartbeat is detected, which can occur as early as six weeks from conception before a woman realizes she is pregnant, lending bipartisanship to the measure. The bill’s sponsor, state Senator John Milkovich, is also a Democrat.

Other states that passed similar measures this year, including Ohio, Mississippi and Missouri, are led by Republican governors.

“As I prepare to sign this bill, I call on the overwhelming bipartisan majority of legislators who voted for it to join me in continuing to build a better Louisiana that cares for the least among us and provides more opportunity for everyone,” Edwards said in a statement on Wednesday.

The measure would allow a woman to have an abortion, after detection of an embryonic heartbeat, to prevent her death or if she risks serious injury.

The Louisiana legislation will not go into effect until a U.S. Appeals Court rules on whether to allow a similar measure in neighboring Mississippi to take effect. Last week, a U.S. district judge blocked the Mississippi law from taking effect, and the Appeals Court that is expected to review the ruling also has jurisdiction over Louisiana.

The Roe v. Wade decision allowed states to restrict abortion from the time a fetus can viably survive outside the womb, which the opinion placed at 24 to 28 weeks from conception.

Anti-abortion campaigners have sought to overturn the decision ever since, and they see an opportunity with the newly installed 5-4 conservative majority on the Supreme Court.

The Louisiana House on Wednesday rejected a proposed amendment that would have allowed exceptions to the ban if a woman became pregnant during a rape or through incest.

Other states that have passed abortion restrictions this year also declined to make exceptions for rape and incest, drawing criticism from Trump, who supports such exceptions.

Abortion rights groups this year are challenging a number of state restrictions in court.

The American Civil Liberties Union and Planned Parenthood obtained an injunction from a judge in March blocking Kentucky’s ban on abortions, which would apply as early as six weeks from conception.

On another front in the battle, Planned Parenthood sued the Missouri Department of health on Tuesday after the department told the state’s only abortion clinic it could not approve a license until it interviewed seven doctors that worked there.

The license for the clinic, which Planned Parenthood operates, is due to expire on Friday.

Missouri Governor Mike Parson, a Republican, on Wednesday, reiterated his intention to close the clinic for failing to meet state licensing standards.

Planned Parenthood said in a statement that Parson’s remarks were “not based on medicine, facts or reality,” and it will do “everything to ensure our patients get the best medical care available.”

Last week, Parson signed into law a measure banning abortion in Missouri after the eighth week of a woman’s pregnancy.