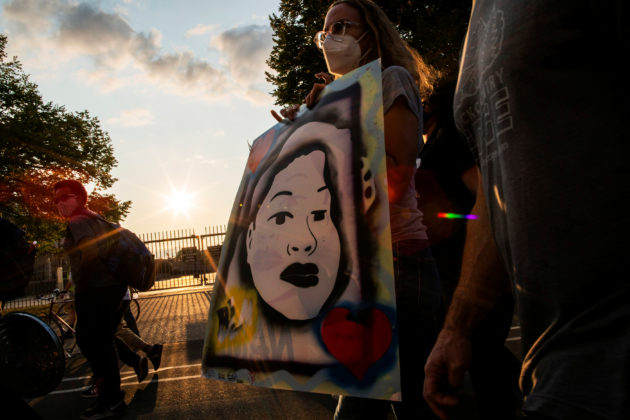 FILE PHOTO: Protesters march during a peaceful protest after a grand jury decided not to bring homicide charges against police officers involved in the fatal shooting of Breonna Taylor, in Louisville, Kentucky September 26, 2020. REUTERS/Eduardo Munoz

(Reuters) – One of the Louisville, Kentucky, police officers who was shot last week during protests following the grand jury’s decision in the Breonna Taylor case on Wednesday called for a de-escalation of tensions between demonstrators and police.

“Hate and violence progresses nothing. It’s only when we can come together in mutual respect and love that we can communicate in an effective way and we can make real change,” Major Aubrey Gregory told a briefing on Wednesday.

Gregory and Officer Robinson Desroches were shot last Wednesday amid protests that erupted following news that a grand jury would not bring murder charges against three police officers involved in the March 13 killing of Taylor during a botched raid at her home.

Larynzo Johnson, 26, is the only suspect in the shootings of the two police officers last week. He was charged with two counts of assault and multiple counts of wanton endangerment. He pleaded not guilty.

Gregory’s calls for calm come as pressure builds on Kentucky’s attorney general, Daniel Cameron, over his handling of the case. Cameron, who presented evidence to the grand jury, said in a Louisville television interview that he did not recommend any charges against the two police officers who shot Taylor, saying the jurors needed to make that decision on their own.

A recording of the grand jury proceedings was scheduled to be made public on Wednesday, but Cameron asked a Jefferson County Circuit Court judge for another week to redact private information, according to a court filing released on Wednesday.

Gregory, who said he had been playing a leading role working with protest organizers to keep demonstrations peaceful, added he was concerned about violence.

“The willingness to profess openly in public the desire to harm, kill, hurt the police and their families has really ratcheted up,” he said.

“We support the demonstrations we do not support violence in any shape, form or fashion,” said Raoul Cunningham, president of the Louisville chapter of the NAACP on Wednesday.

“We hope that the situation here will come to a peaceful conclusion. And we also hope that justice will come regarding the murder of Breonna Taylor.”