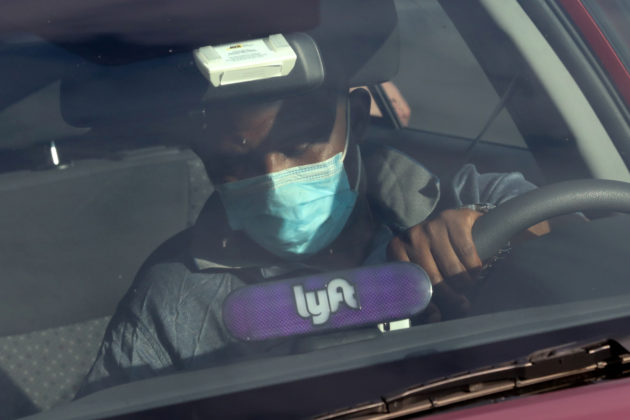 FILE PHOTO: A Lyft driver wears a mask during the coronavirus outbreak, as he leaves passengers in the U.S. Capitol Hill neighborhood in Washington, U.S. April 1, 2020. REUTERS/Jonathan Ernst/File Photo

By Moira Warburton and Tina Bellon

TORONTO/NEW YORK (Reuters) – Lyft will require both passengers and drivers to wear masks and complete a health certification program, including confirming before each ride that they are not displaying symptoms associated with the novel coronavirus, the company said on Thursday.

The move comes as ridesharing companies struggle to maintain revenues with millions of people worldwide under social distancing orders from public health authorities.

Lyft has previously committed to distributing masks to its more than one million drivers, focusing on cities where masks are required by law, said Angie Westbrock, head of global operations, although she declined to say how many masks had been or would be distributed.

“A really important component of this policy is that it’s not just for drivers,” Westbrock said. “This policy requires passengers to also certify that they’re going to comply with this health safety policy and that they’ll also wear a mask.”

Passengers are also asked to leave the windows open when possible, and not sit in the front seat of cars.

Masks and cleaning supplies for drivers will be distributed through Lyft’s hubs, some of which will reopen for this purpose, Westbrock said.

Uber Technology Inc, Lyft’s main competitor, has said they will implement technology that will require drivers to submit a photo of their face to confirm that they are wearing the mandatory mask.

Unlike Uber, Lyft only operates in the United States and parts of Canada.

Didi, a Chinese ridesharing company, is paying to install plastic barriers in cars to protect riders and drivers.

Westbrock said that Lyft is “always looking at new technology and thinking about ways to improve health and safety,” and that Thursday’s announcement represents “the first step and a really important foundation to build on… as the situation evolves.”

Nicole Moore, a part-time Lyft driver and volunteer with Drivers United, an advocacy group representing ride-hail drivers in the United States, said many drivers have not been able to access the promised masks, and have had to buy their own.

The requirements also put the onus on drivers to enforce the new rules, she said.

Lyft is “not doing what they need to do to protect their brand and the people who work for them that generate the cash that they use,” Moore said.

A corporate policy such as installing plastic barriers “would be a huge help,” she added.

Lyft said in its earnings call on Wednesday that U.S. ridership had improved more than 20% from coronavirus-hit rock bottom last month and that it believes Americans will turn to ride-hailing as the first opportunity to make up for lost income as the U.S. economy reopens, helping the company cut down on driver incentives and other costs.

(Reporting by Moira Warburton in Toronto and Tina Bellon in New York; Editing by Daniel Wallis)