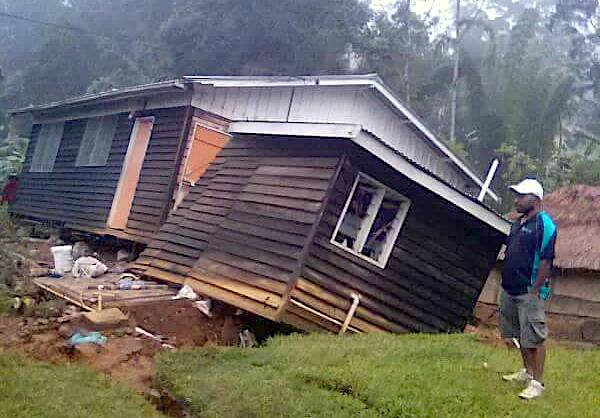 A local stands next to a damaged house near a landslide in the town of Tari after an earthquake struck Papua New Guinea's Southern Highlands in this image taken February 27, 2018 obtained from social media. Francis Ambrose/via REUTERS

SYDNEY (Reuters) – Strong aftershocks rocked Papua New Guinea’s remote and rugged highlands on Monday, as the death toll climbed to 55 from a 7.5-magnitude earthquake a week ago, and is expected to rise further.

Three aftershocks of magnitude greater than 5 shook the mountainous Southern Highlands, about 600 km (370 miles) northwest of the capital Port Moresby early on Monday, the U.S. Geological Survey said, including a shallow magnitude 6 quake.

“We haven’t slept. It’s been shaking all through the night,” William Bando, provincial administrator of Hela Province, said by telephone from Tari, about 40 km (25 miles) from the site of the shocks.

“What we experienced this morning could have caused more damage, but we don’t know … it almost threw me out of bed.”

The region had already been badly damaged on Feb. 26, when the largest quake to hit the seismically-active highlands in nearly a century flattened buildings, triggered landslides, and closed oil and gas operations.

The toll on Monday stood at 55 killed, said James Justin, a research officer at the Ministry of Petroleum and Energy in Port Moresby, as news of more deaths arrived in the capital by shortwave radio.

Most of the confirmed fatalities were in and around the provincial capital of Mendi and the township of Tari, he said, where landslides buried homes and buildings collapsed on families.

“People are in great fear of their lives as the quakes are continuing ever since it started,” he said. “They actually want to know when it will stop.”

While the region has no major urban centres, around 670,000 people live within 100 km (62 miles) of the epicentre, according to the Red Cross.

The company declined to comment on the force majeure, but said production would be knocked out for about 8 weeks.

Australia, New Zealand and the Red Cross have all pledged aid, though reaching the remote area has proven challenging as forbidding terrain, bad weather, as well as damaged roads and runways have delayed aid efforts.

“The only way for people to go out is by chopper, and it’s slow for information to come through”, said Martin Mose, director of Papua New Guinea’s National Disaster Centre, which has yet to complete a full assessment of damage.

(Reporting by Tom Westbrook in Sydney; Additional reporting by Charlotte Greenfield in Wellington; Editing by Robin Pomeroy and Clarence Fernandez)