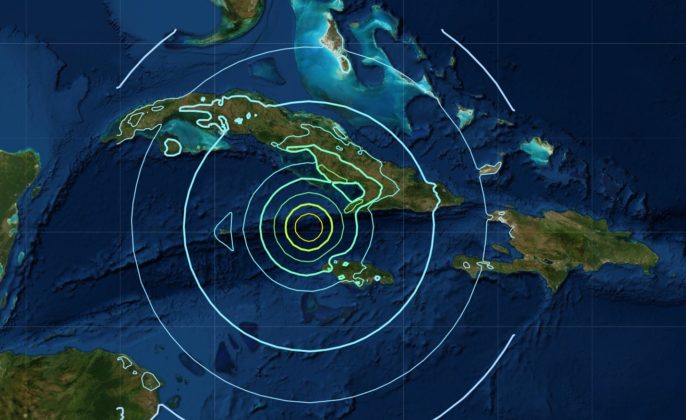 (Reuters) – A powerful magnitude 7.7 earthquake struck the western Caribbean on Tuesday, triggering evacuations as buildings shook across the Cayman Islands, in Jamaica, and in downtown Miami, but with no initial reports of significant damage.

The epicenter of the quake was in the sea between Jamaica, the Cayman Islands and Cuba, at a shallow depth of 6.2 miles (10 km).

The International Tsunami Information Center said an earlier threat of a tsunami wave had largely passed. Minor sea level fluctuations up to 1 feet (30 cm) were still possible, it said.

In Miami, Florida, several buildings downtown had groups of people standing outside who said they had been evacuated.

“As of now, there are no injuries or structural damages. Residents/visitors are advised to stay calm,” the department said on Twitter.

Officials across the region had no initial reports of major damage, despite the size of the quake.

Angie Watler, a spokeswoman for police on Cayman Brac, the island nearest the epicenter of the quake, said members of the public had reported some damage to buildings and to a swimming pool at the Carib Sands resort on the south of the island.

Videos on social media, apparently from Jamaica and the Cayman Islands, showed water sloshing out of pools during the quake.

Watler said there were no reports so far of injuries but that authorities were still making checks on the area.

A Cayman Islands official said there had been some reports of sinkholes following the quake.

The quake was also felt in several provinces across Cuba, the government said. It was not strongly felt in the capital of Havana, according to a Reuters witness.

(Reporting by Dave Graham and Lizbeth Diaz in Mexico City and Zachary Fagenson in Miami; Additional reporting by Sandra Maler in Washington and Sarah Marsh in Havana; Writing by Frank Jack Daniel; Editing by Nick Zieminski and Rosalba O’Brien)