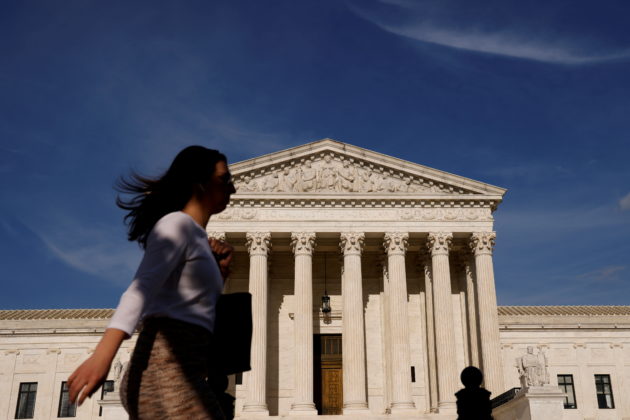 WASHINGTON (Reuters) -The U.S. Supreme Court heads into the last month of its current term with several major cases yet to be decided including a Republican bid to invalidate the Obamacare healthcare law, a dispute involving LGBT and religious rights and another focused on voting restrictions.

The court, which has a 6-3 conservative majority, now has 24 cases in total left to decide after issuing two rulings on Tuesday. There also is speculation about the potential retirement of its oldest justice, Stephen Breyer. Some liberal activists have urged Breyer, who is 82 and has served on the court since 1994, to step down so President Joe Biden can appoint a younger liberal jurist to a lifetime post on the court.

In the most notable of Tuesday’s decisions, the court unanimously endorsed the authority of Native American tribal police to stop and detain non-Native Americans on tribal land.

The court’s nine-month term starts in October and generally concludes by the end of June, though last year it continued into July because of delays caused by the COVID-19 pandemic.

Speaking during an online event for students on Friday, Breyer hinted at the court’s complex deliberations that go into deciding high-stakes cases at this time of year.

“It’s complicated by the fact that you are dealing with eight other colleagues. … You’d better be willing to compromise,” Breyer said.

Republican-governed states have asked the court to strike down the Affordable Care Act, a law signed in 2010 by Democratic former President Barack Obama that has helped expand healthcare access in the United States even as Republicans call it a government overreach.

It appears unlikely based on November’s oral arguments that the court would take such a drastic step. But if the Obamacare law were to be struck down, up to 20 million Americans could lose their medical insurance and insurers could once again refuse to cover people with pre-existing medical conditions. Obamacare expanded public healthcare programs and created marketplaces for private insurance.

Another major case yet to be decided is one that pits religious rights against LGBT rights as the justices weigh Philadelphia’s refusal to let a Catholic Church-affiliated group participate in the city’s foster care program because it would not accept same-sex couples as prospective foster parents.

The conservative justices appeared during the November arguments in the case to be sympathetic toward the Catholic group’s claim that its religious rights under the U.S. Constitution’s First Amendment had been violated. The court’s conservative majority has taken an expansive view of religious rights and has spearheaded several rulings backing churches in challenges to COVID-19 pandemic-related restrictions.

With various states enacting new Republican-backed voting restrictions in the aftermath of former President Donald Trump’s false claims that the 2020 election was stolen from him through widespread voting fraud, the court is preparing to rule in a case concerning Arizona voting limits.

The court also is getting ready to decide a closely watched case involving the free speech rights of public school students. It involves whether a high school that punished a cheerleader for a foul-mouthed social media post made off campus on a weekend violated her free speech rights under the First Amendment.

The court has taken up major cases on gun and abortion rights for its next term, which begins in October.