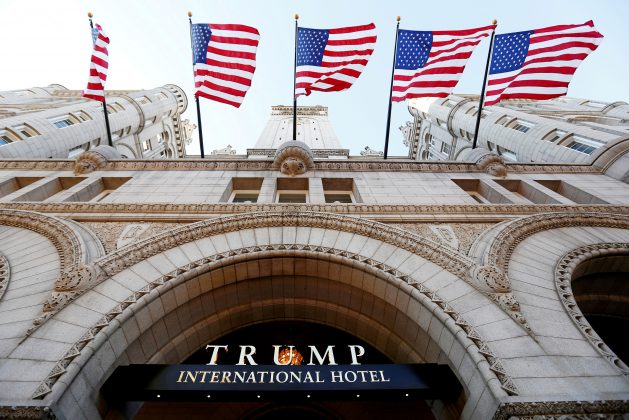 FILE PHOTO - Flags fly above the entrance to the new Trump International Hotel on its opening day in Washington, DC, U.S. on September 12, 2016. REUTERS/Kevin Lamarque/File Photo

WASHINGTON (Reuters) – A Pennsylvania man was arrested at President Donald Trump’s Washington hotel early on Wednesday after police found a rifle, pistol and ammunition in his car, a discovery they said may have prevented a disaster in the U.S. capital.

Brian Moles, 43, of Edinboro, was taken into custody shortly after checking into the Trump International Hotel a few blocks from the White House, Metropolitan Police Chief Peter Newsham told a news conference.

A tipster had told the Pennsylvania State Police that Moles was traveling to Washington with weapons, and the information was passed on to the Secret Service and Washington police, Newsham said.

“I believe that the officers and our federal partners and in particular the tipster coming forward averted a potential disaster here in our nation’s capital,” Newsham said.

Moles was arrested without incident, the chief said.

Asked about reports that Moles had made threatening remarks, Newsham said his motive was under investigation and there was not enough information to charge Moles with making threats. The nature of the threats has not been divulged.

The Secret Service said in a statement it also was investigating the incident but said that no one under its protection was ever at risk.

Police had been told Moles had a Glock 23 pistol and a Carbon 15 Bushmaster rifle, an incident report said. Officers saw one of the guns in his car and found a second firearm in the glove compartment.

Moles also had 30 rounds of 7.62mm ammunition and 60 .223-caliber rounds, the report said. He was charged with two counts of carrying a pistol without a license and possessing unregistered ammunition.

Police spokeswoman Karimah Bilal had no information about an attorney for Moles.

Trump’s hotel on Pennsylvania Avenue, housed in a landmark former post office, has become a focal point for protests against the Republican president since he took office in January.

Edinboro Police Chief Jeff Craft said by telephone that Moles had no criminal record in the western Pennsylvania town and was not known to police.