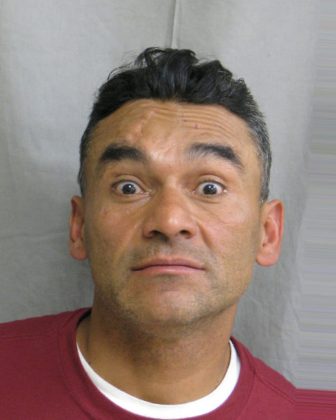 By Steve Gorman and Alex Dobuzinskis

LOS ANGELES (Reuters) – A man who police said fled to California from Texas after being questioned in the disappearance of two relatives was charged on Wednesday in Los Angeles with bludgeoning eight men, three fatally, in a string of attacks aimed mostly at homeless victims.

Ramon Alberto Escobar, 47, an El Salvador native and convicted burglar who has been repeatedly deported from the United States, was arrested on Monday after he allegedly clubbed a sleeping man in the head with bolt-cutters in the ocean-front city of Santa Monica, authorities said.

Seven other men were similarly attacked in Santa Monica and Los Angeles earlier this month, according to the Los Angeles County District Attorney’s Office.

Police have said one victim was sleeping under a pier after a night of fishing and that most of the rest of the victims were homeless, including three men battered with a baseball bat in downtown Los Angeles on Sept. 16.

Two of those victims and the man attacked beneath the pier died of their injuries. Some survivors were left in a coma.

On Wednesday, the district attorney’s office formally charged Escobar with three counts of murder, five counts of attempted murder and four counts of robbery. If convicted of murder, he faces a minimum sentence of life without parole.

U.S. Immigration and Customs Enforcement (ICE) officials said Tuesday that Escobar had been deported back to El Salvador six times between 1977 and 2011 and has six felony convictions for burglary and illegal re-entry. Police have said he spent five years in a Texas prison for burglary from 1995 to 2000.

Escobar in 2016 filed an appeal of his immigration case, which U.S. courts granted in December of that year, and he was released from ICE custody on an “order of supervision” in January 2017, ICE spokesperson Paige Hughes said by email.

Escobar, now jailed without bond, briefly appeared in Los Angeles Superior Court on Wednesday, but the arraignment was postponed until Nov. 8. No plea was entered.

Judge Gustavo Sztraicher granted a defense motion barring public dissemination of the defendant’s image, including by photograph or courtroom sketch drawing, so as not to prejudice potential witnesses who might identify him for prosecutors.

Escobar appeared expressionless and said nothing except to answer, “Yes, sir,” when asked if he agreed to the postponement.

Meanwhile, police in Houston said Escobar was a “person of interest” in the investigation into the disappearance of an aunt and uncle with whom Escobar lived before they were reported missing in late August by other relatives.

The aunt’s van was later found burned and abandoned in Galveston, Texas, according to Houston police spokesman Kese Smith.

Escobar was questioned by Houston homicide detectives on Aug. 30, but they lacked probable cause to detain him at the time, Smith told Reuters on Wednesday, adding that Houston detectives would seek to “re-interview” Escobar in California.

Hayes said Escobar “fled” Texas by car soon after he was questioned in Houston, arriving in Los Angeles on Sept. 5. The first attack police linked to him occurred three days later.