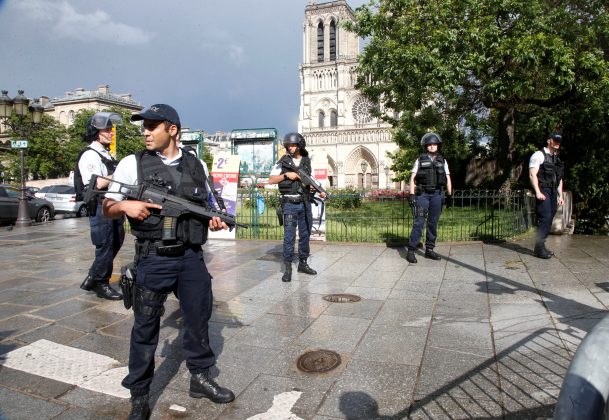 French police stand at the scene of a shooting incident near the Notre Dame Cathedral in Paris, France, June 6, 2017. REUTERS/Charles Platiau

PARIS (Reuters) – French police shot and wounded a man who attacked officers with a hammer outside the Notre Dame cathedral on Tuesday and the Paris prosecutor’s office swiftly launched a counter-terrorism investigation.

Armed police cordoned off the site and the cathedral in central Paris that is visited by millions of tourists every year was locked down during the incident.

The motive for the attack was not immediately clear. It comes just three days after Islamist militants killed seven people in London in a knife and van attack.

“Situation under control, one policeman injured, the assailant was neutralized and taken to hospital,” Paris police said on Twitter.

Two police sources said the officers shot the assailant in the thorax after he had threatened them with a hammer and refused to stop. One policeman was hurt, according to one source.

Karine Dalle, a spokeswoman for the Paris diocese, told BFM TV 900 people were still inside the cathedral as police secured the area.

One holidaymaker inside Notre Dame wrote on Twitter: “Not the holiday experience wanted. Trapped in Notre Dame Cathedral after police shoot a man. We are with our 2 terrified children.”

France is under a state of emergency after a wave of militant attacks since early 2015 that have killed more than 230 people across the country.

It has soldiers patrolling its streets alongside police to protect tourist sites, government buildings and events.

Three women were arrested in September after police found a car laden with gas cylinders abandoned near Notre Dame cathedral in what the interior ministry at the time said was a likely planned imminent attack.