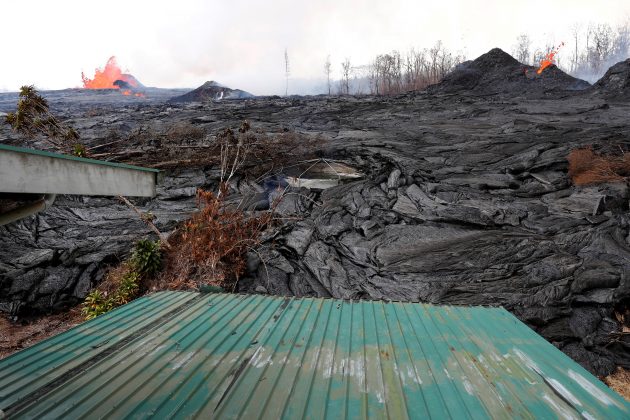 As volcanic fissures spurts molten rock into the air, lava slowly approaches a home on Nohea Street in the Leilani Estates near Pahoa, May 27, 2018. REUTERS/Marco Garcia

HONOLULU (Reuters) – The Hawaii community hardest hit by the Kilauea Volcano was ordered sealed off under a strict new mandatory evacuation on Thursday as the eruption marked its fourth week with no end in sight.

The mandatory evacuation zone lies within a slightly larger area that was already under a voluntary evacuation and curfew.

The latest order was announced a day after police arrested a 62-year-old Leilani Estates resident who fired a handgun over the head of a younger man from the same community, apparently believing his neighbor was an intruder or looter.

The confrontation on Tuesday was recorded on cell phone video that later went viral.

But the mandatory evacuation was “decided prior to that incident,” said David Mace, a spokesman for the Federal Emergency Management Agency currently assigned to the Hawaii County Civil Defense authority.

Civil defense officials have previously said about 2,000 residents in and around Leilani Estates were displaced at the outset of the current eruption, which began on May 3.

But the total number of evacuees was estimated to have risen to about 2,500 after authorities ushered residents from the nearby Kapoho area as a precaution on Wednesday, as a lava flow threatened to cut off a key access road.

At least 75 homes — most of them in Leilani Estates — have been devoured by streams of red-hot molten rock creeping from about two dozen large volcanic vents, or fissures, that have opened in the ground since Kilauea rumbled back to life four weeks ago. Lava flows also have knocked out power and telephone lines in the region, disrupting communications.

Besides spouting fountains of lava around the clock, the fissures have released high levels of toxic sulfur dioxide gas on a near constant basis, posing an ongoing health hazard. Meanwhile, the main summit crater has periodically erupted in clouds of volcanic ash that create breathing difficulties and other problems for residents living downwind.

The heightened volcanic activity has been accompanied by frequent earthquakes, as magma — the term for lava before it reaches the surface — pushes its way up from deep inside the earth and exerts tremendous force underground.

After a month of continual eruptions at Kilauea’s summit and along its eastern flank, geologists say they have no idea how much longer it will last.

“There’s no sign we’re getting that anything is going to slow down at the moment,” Wendy STOVL, a vulcanologist for the U.S. Geological Survey, told reporters on a conference call on Thursday. “We don’t see any changes occurring.” 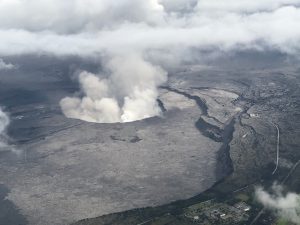 An aerial view of Kilauea Volcano’s summit caldera and an ash plume billowing from Halema’uma’u, a crater within the caldera, May 27, 2018. Courtesy of the Civil Air Patrol/USGS/Handout via REUTERS

The island’s mayor on Wednesday renewed an emergency proclamation for 60 more days, allowing construction of temporary shelters and other relief projects to proceed on an expedited basis, without reviews and permits normally required.

The month-old eruption of Kilauea, one of the world’s most active volcanoes, followed an eruption cycle that had continued almost nonstop for 35 years.

Stovall said geologists now believe the latest upheaval should be classified as a separate volcanic event, though an official determination has yet to be made.