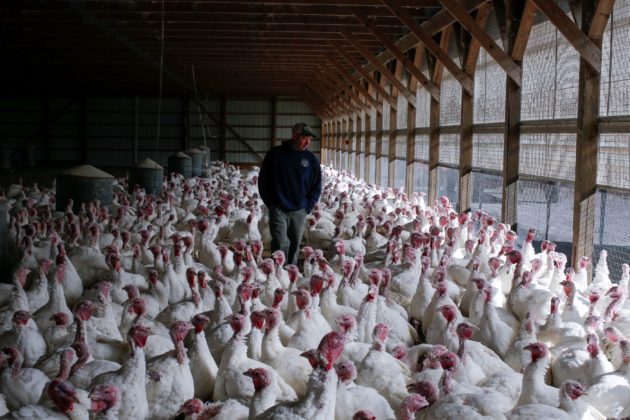 By Barbara Goldberg and Richa Naidu

(Reuters) – When American vegetarians, pescetarians and flexitarians sit down at the Thanksgiving table this week, there’s one thing many agree they would be thankful for: a tasty, plant-based alternative to turkey.

Wildly popular for their taste and texture, Impossible Burger, Beyond Burger and other plant-based alternatives have revolutionized the fake meat market, and now account for about 5 percent of U.S. meat purchases.

But when it comes to turkey, the traditional star of Thanksgiving feasts, nothing has drummed up the same level of shopper excitement and acceptance.

“I’d love to see an Impossible turkey by next Thanksgiving,” said Cordia Popp, 42, a vegetarian and stay-at-home mother of two who lives in upstate New York. The most authentic-tasting turkey alternative now on the market, Popp said, “doesn’t have that shred like real turkey has.”

Twenty-five years ago Tofurky, a tofu turkey, hit the market and now sells 400,000 roasts each holiday season. But many vegetarians say the search is still on for a plant-based alternative that hits the mark for turkey flavor and texture the same way plant-based options have nailed the beef target.

Beyond Meat urges fans to create holiday dishes from existing beef and sausage alternatives, while Impossible Foods told Reuters that a turkey alternative is among its long-term goals.

First to reach the finish line may be one of the major turkey producers, Butterball, Perdue Farms or Tyson Foods Inc. Each says it is developing vegetarian options as a growing number of Americans become so-called flexitarians, wading in and out of vegetarianism.

“Don’t be surprised if more protein options find their way onto future Thanksgiving tables,” a Tyson spokeswoman said. “We are looking at options across protein forms. We aren’t sharing future product roll out dates at this time.”

Bill See, a Perdue Farms spokesman, said, “We have something in the pipeline but (it’s) too early to talk about.”

Butterball will run limited tests of plant-based turkey options next year, said Jeff Mundt, vice president of research & development and innovation. Still, the company is confident that for many there is “no substitute for a tender and juicy turkey at the center of the holiday table,” Mundt said.

While Impossible and Beyond have aced the beef-like product for backyard burgers, the bar may be higher for a turkey-like product to grace Thanksgiving tables, said Mike Leonard, who leads research and development at plant-based food technology firm Motif FoodWorks.

“Thanksgiving is all about turkey,” said Leonard, whose company works with several U.S. vegan meat companies. He said no one yet has “cracked the code” on how to make a plant-based turkey that looks and feels and tastes like a real one.

Turkey consumption has remained relatively steady in the United States in recent years, with about 5 billion pounds (2.3 metric tons) of turkey consumed annually, according to Sue King, spokeswoman for the U.S. Department of Agriculture.

Consumers looking for better taste and texture in a plant-based turkey alternative say they are motivated by concern for their own health, animal welfare and the environmental stresses of raising animals for meat.

The problem is often taste.

Michael Giulietti, a meat-eating fan of Impossible Burgers, is among those awaiting an appetizing breakthrough in turkey alternatives. While large-scale turkey producers have cornered the market on flavor, Giulietti said, he is troubled by their methods.

“Factory birds are mutants with huge breasts, but they are tastier,” said Giulietti, 32, a medical student advisor from Oregon. “I hope the Impossible turkey tastes like the factory-raised ones so I can have taste without ethical issues.”