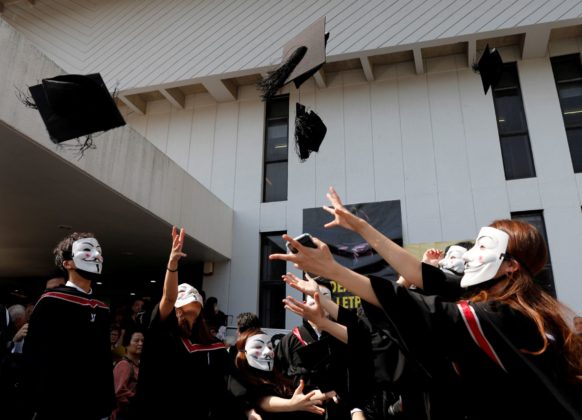 The students defied a ban on masks that the government imposed last month in a bid to curb sometimes violent unrest that has rocked the Chinese-ruled city for more than five months.

Dressed in formal graduation gowns, many of about 1,000 students chanted as they walked to the hill-top ceremony, near the New Territories town of Sha Tin, calling for the government to respond to protesters’ “five demands, not one less” that include universal suffrage in choosing the city’s leader.

A man singing the Chinese national anthem and holding a knife during the graduation ceremony was taken away by security officers.

The protests started over a now-scrapped extradition bill that would have allowed people to be sent to mainland China for trial but have evolved into calls for democracy, an end to Chinese meddling in the city’s promised freedoms and an independent inquiry into perceived police brutality, among other things.

“Even though we are all exhausted, we should not give up,” said Kelvin, a 22-year-old information engineering graduate.

The university said it cut the ceremony short after the degrees were handed out.

The months of protests have plunged the former British colony into its biggest crisis in decades, with no sign the demonstrators plan to give up.

Hong Kong returned to Chinese rule in 1997 under a “one country, two systems” formula, allowing it colonial freedoms not enjoyed on the mainland, including an independent judiciary and right to protest.

About 100 people, including candidates running in Nov. 24 district council elections, the lowest tier of voting, marched against violence on Thursday.

A man stabbed and wounded pro-Beijing lawmaker Junius Ho on Wednesday. Jimmy Sham, a leader of Hong Kong’s Civil Human Rights Front, was beaten by men with hammers in October after his group organized mass rallies against the extradition bill.

Pro-democracy district councilor Andrew Chiu had part of his ear bitten off by a knife-wielding man on Sunday.

District council candidate Clement Woo, who joined the march, said members of the pro-establishment camp had experienced violence and intimidation.

“How can the election be a fair one if the atmosphere is like this?” Woo told Reuters. “We support democracy in Hong Kong, but democracy is incomplete without safety and fairness.”

Executive Councilor Ip Kwok-him, speaking on RTHK radio, expressed doubts as to whether election campaigning could continue in a fair and peaceful manner. He suggested the government decide by Nov. 17 if the elections should go ahead.

China has offered the “one country, two systems” formula for self-ruled Taiwan, an island Beijing considers a breakaway province.

The unrest in Hong Kong had provided a lesson for Taiwan, its foreign minister, Joseph Wu, told Reuters in Taipei.

“People here understand that there’s something wrong (with)the way the ‘one country, two systems’ model is run in Hong Kong … Taiwan people don’t like to be in the same situation,” Wu said.

The unrest has helped push Hong Kong’s economy into recession for the first time in a decade. Retail and tourism sectors have been hit particularly hard as tourists stay away.

UNICEF Hong Kong called off its annual Run for Every Child charity road run on Nov. 24 “due to a range of ongoing and uncertain factors”.