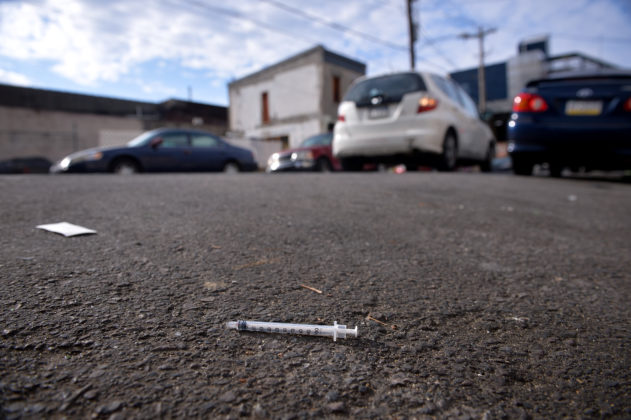 FILE PHOTO: A needle lays in the street in the Kensington section of Philadelphia, Pennsylvania, October 2017. REUTERS/Charles Mostoller

(Reuters) – McKesson Corp said on Tuesday that it and two other major U.S. drug distributors could be expected pay up to $21 billion under a new proposal by state attorneys general to resolve lawsuits alleging they helped fuel the U.S. opioid crisis.

That proposal, part of a settlement framework negotiated with four state attorneys general, met resistance from lawyers for local governments and several states, leading to further talks. J&J on Oct. 13 said it would now contribute $5 billion.

McKesson in a quarterly report said that under the new $21 billion settlement framework proposed by attorneys general, the San Francisco-based company would pay about $8 billion over 18 years.

The company said the proposal was subject to further negotiations and that it “has not reached a point where settlement is probable.”

The lawsuits, largely filed by states, counties and cities, seek to hold drug companies responsible for an opioid addiction epidemic that according to U.S. government data resulted in 450,000 overdose deaths from 1997 to 2018.

The lawsuits generally accuse drugmakers of deceptively marketing opioids and distributors of ignoring red flags indicating the prescription painkillers were being diverted for improper uses. They deny wrongdoing.

McKesson on Tuesday said in addition to the $21 billion, the proposed settlement also calls for the distributors to make changes to their programs to guard against the diversion of drugs for illicit purposes.

OxyContin maker Purdue Pharma and generic painkiller manufacturer Mallinckrodt Plc previously filed for bankruptcy protection in connection with their own multibillion-dollar proposals to resolve claims against them in the litigation.

(Reporting by Nate Raymond in Boston and Manas Mishra in Bengaluru; Editing by Peter Graff and Bill Berkrot)