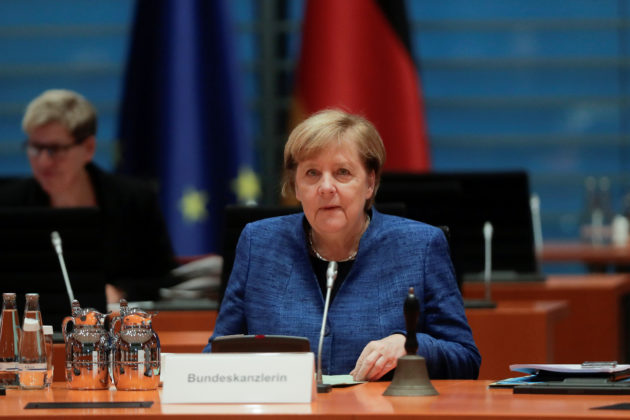 By Sabine Siebold and Michelle Adair

BERLIN (Reuters) – Chancellor Angela Merkel will press regional leaders on Wednesday to agree to a partial lockdown in Germany which would see restaurants and bars closed but keep schools open, a draft document seen by Reuters said.

To compensate firms hit by the new measures, Finance Minister Olaf Scholz wants to make available up to 10 billion euros in aid, three people familiar with the matter said.

The drastic steps, which top-selling Bild daily said will take effect from Nov. 2, are aimed at curbing the spread of the coronavirus in Europe’s biggest economy as the number of new cases hit a record high.

Under the new planned restrictions, people would be able to go out with members only of their own and one other household. Fitness studios, discos and cinemas would close, as would theatres, opera houses and concert venues.

Restaurants would offer only takeaways. Shops could stay open if they impose hygiene measures and limit customer numbers.

Merkel is in virtual talks with the country’s 16 state premiers to hammer out nationwide rules to replace a confusing patchwork of regional measures. She is expected to announce the package later in the afternoon or evening.

Almost all areas of Germany face an exponential increase in infection rates, warned the document under discussion, and local health authorities can no longer trace all infections.

“The aim is to interrupt the dynamic of the infection fast so no far-reaching limits on personal contact and economic activity are needed over the Christmas period,” it said.

Germany was widely praised for keeping infection and death rates below those of many of its neighbours in the first phase of the crisis but is now in the midst of a second wave. Cases rose by 14,964 to 464,239 in the last 24 hours, Germany’s infections diseases agency, the Robert Koch Institute, said on Wednesday.

Deaths jumped by 85 to 10,183, fuelling fears about the health system after Merkel warned it could hit breaking point if infections continue to spiral.

“If we wait until intensive care is full, it is too late,” said Health Minister Jens Spahn, who last week tested positive for the virus.

The government is desperate to avoid another blanket lockdown after one in March-April decimated growth, with the economy shrinking by a record 9.7% in the second quarter.

Economists expect a rebound for the July-Sept period but warn that a further lockdown could wipe out growth in the last quarter. Third quarter data is due on Oct. 30.

The government aims to provide aid to firms hit by closures, including the cultural sector. Scholz wants to compensate 75% of lost sales for small and mid-sized firms forced to close in November, sources told Reuters. Big companies would get 70%.

Only necessary overnight stays would be allowed. Brothels, swimming pools, beauty parlours and tattoo studios would close but physiotherapists and hairdressers could operate. The steps would run until the end of November but are subject to review.