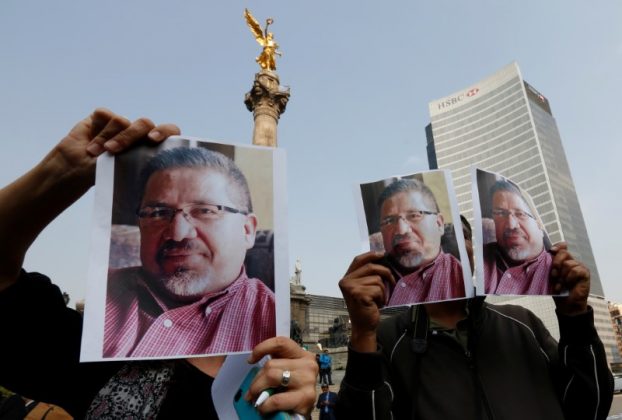 Journalists and photographers hold up pictures of journalist Javier Valdez during a demonstration against his killing and for other journalists who were killed in Mexico, at the Angel of Independence monument in Mexico City, Mexico May 16, 2017. REUTERS/Henry Romero

MEXICO CITY (Reuters) – Mexican journalists covered news conferences wearing black on Tuesday, and brought pictures of slain colleagues to rallies to put pressure on authorities to act against an escalation of murderous attacks on their trade.

The mourning and protests followed a particularly deadly day for the media in Mexico, where warring drug cartels have made it one of the most dangerous countries to be a journalist.

On Monday, veteran organized crime writer Javier Valdez was shot dead by unidentified assailants in the northwestern state of Sinaloa while gunmen in Jalisco state killed a reporter at a small weekly magazine and critically wounded his mother, an executive at the family-run publication.

Authorities have yet to announce arrests in the two new cases, feeding fears of impunity that have become disturbingly familiar to the profession in Mexico.

“We’ve been living in a giant simulation; they say they’re investigating and that freedom of expression is protected, but clearly it’s not,” Juan Carlos Aguilar of the collective Right to Inform said at a protest in Mexico City.

Last year a record 11 journalists were killed, according to advocacy group Articulo 19.

Journalists wrote “they are killing us” in large letters at the foot of the Angel of Independence monument in central Mexico City and flashed pictures of dead reporters to passing cars. Rallies were also held in other cities, including crime-ravaged Culiacan, where Valdez was killed.

Valdez spent years documenting the violence in Mexico, and his death triggered an outpouring of grief across the country.

The killings come ahead of a key state election next month and the 2018 presidential vote – fuelling worries that it could result in a less-informed public.

“This isn’t just us being killed as people, this is a silencing of those who talk,” freelance journalist Paula Monaco said at the protest.

Mexico is struggling to contain a resurgence in violence among rival drug cartels that has pushed homicides to levels not seen since 2011.

Groups monitoring journalistic freedom say corrupt local authorities and police target journalists as well, and that the vast majority of attacks on the press go unpunished, despite a special prosecutor’s office assigned to investigating them.

A new special prosecutor was recently named amid criticism that the previous one failed to secure convictions in dozens of unsolved cases.

“This is truly a crisis. We’re tired of burying our colleagues,” said photojournalist Quetzalli Gonzalez.