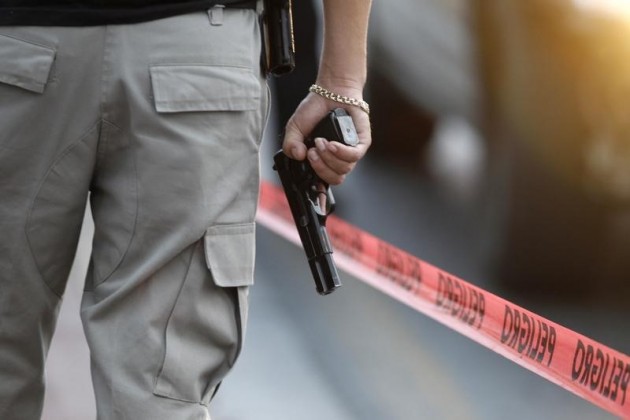 A police detective stands guard at a crime scene in Monterrey in this file photo dated June 5, 2011. REUTERS/Tomas Bravo

MEXICO CITY (Reuters) – Mexican security forces have committed crimes against humanity, with mass disappearances and extrajudicial killings rife during the country’s decade-long drug war, according to a report released by rights groups on Monday.

The 232-page report, published by the Open Society Justice Initiative and five other human rights organizations, warned that the International Criminal Court could eventually take up a case against Mexico’s security forces unless crimes were prosecuted domestically.

“We have concluded that there are reasonable grounds to believe there are both state and non-state actors who have committed crimes against humanity in Mexico,” the report said.

Mexico’s drug war has resulted in the most violent period in the country’s modern history, with more than 150,000 people killed since 2006.

Consistent human rights abuses — including those committed by members of the Zetas drug cartel— satisfied the definition of crimes against humanity, the report said.

“Resorting to criminal actions in the fight against crime continues to be a contradiction, one that tragically undermines the rule of law,” the report stated.

The unresolved 2014 kidnapping and apparent killing of 43 students from the Ayotzinapa teacher-training college was one of the most high-profile cases to have damaged Mexico’s reputation.

The report was based on documents and interviews over a nine-year period from 2006 to 2015.

It cited mass graves and thousands of disappearances, in addition to killings such as the shooting by the army of 22 suspected gang members in Tlatlaya in central Mexico, and similar incidents, as evidence of criminality in the government’s war against the country’s drug cartels.

Eric Witte, one of the report’s authors, recommended that the government look at the U.N. Commission against Impunity in Guatemala (CICIG) as an example for inviting an international investigative commission to bring cases in Mexican courts.

The report criticised Mexico’s weak justice system. If atrocities continued without measures being taken to end impunity, the International Criminal Court could step in, said Witte, a former advisor at the Hague-based court.

“Unfortunately, Mexico might be one atrocity away from an international commission becoming politically viable,” Witte, who leads national trials of grave crimes for the Open Society Justice Initiative, told Reuters.