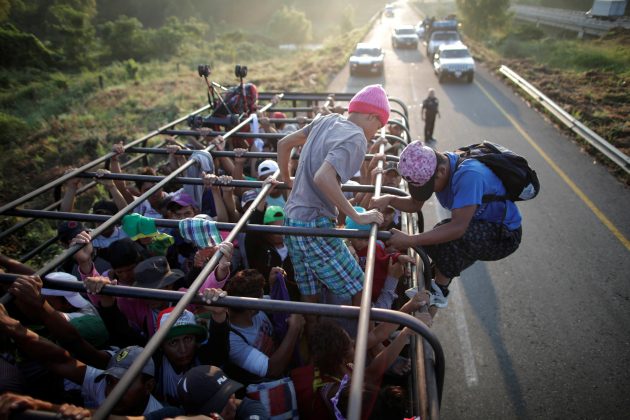 Migrants, part of a caravan of thousands from Central America en route to the United States, hitchhike on a truck along the highway to Arriaga from Pijijiapan, Mexico, October 26, 2018. REUTERS/Ueslei Marcelino

PIJIJIAPAN, Mexico (Reuters) – Mexico on Friday offered temporary identification papers and jobs to migrants who register for asylum in the country, stepping up efforts to halt the advance of a U.S.-bound Central American caravan that has angered Washington.

U.S. President Donald Trump has threatened to close the U.S.-Mexico border and cut aid to Central America to try to stop the caravan of several thousand people. U.S. officials have said that up to 1,000 troops may be sent to the U.S. southern border to prevent the migrants from crossing.

Making reference to the caravan, Mexican President Enrique Pena Nieto said that migrants wishing to obtain temporary identification documents, jobs or education for their children could do so by registering for asylum in southern Mexico.

“This plan is only for those who comply with Mexican laws, and it’s a first step towards a permanent solution for those who are granted refugee status in Mexico,” Pena Nieto said in a pre-recorded address broadcast on Friday afternoon.

To qualify for the scheme he called “Estas en Tu Casa” (‘Make Yourself at Home’) migrants had to be in the southern states of Chiapas and Oaxaca, Pena Nieto said.

Temporary work in the states would be extended so as also to benefit Mexicans, said Pena Nieto, who leaves office on Nov. 30.

The caravan, which is moving through Chiapas on the border of Guatemala, has enabled Trump to campaign hard on illegal immigration ahead of midterm congressional elections on Nov. 6, in which Republicans are battling to keep control of Congress.

Mexican officials have said those migrants who do not qualify for refugee status are liable to be deported.

Mexico’s government has said that more than 1,700 people in the convoy have registered for asylum, while others have returned home. Estimates on the size of the group vary.

Alden Rivera, the Honduran ambassador to Mexico, told Mexican radio on Friday that the caravan could reach Mexico City by next Friday. He put an “official” headcount at 3,500, estimating that at least two-thirds of them were Hondurans.

The caravan set off in Honduras nearly two weeks ago and has picked up other Central Americans en route.

Alexander Fernandez, a Honduran traveling in the caravan, said people began leaving the town of Pijijiapan at about 3 a.m. to head for Arriaga, a town in the west of Chiapas.

A banner hanging over a bridge on the migrants’ path read: “Your hearts are brave, don’t give up.”

Tens of thousands of Central Americans set off for the United States every year, looking to escape violence and poverty. Hondurans, Guatemalans and Salvadorans make up the bulk of illegal immigrants apprehended at the U.S. border.

On Thursday night, thousands of people took refuge under small tents or teepees made from garbage bags in Pijijiapan’s town square. Many people rushed to a nearby river in the afternoon to wash off the sweat of travel and extreme heat.

A White House official said on Thursday that “a wide range of administrative, legal and legislative options” were being considered regarding the migrants.