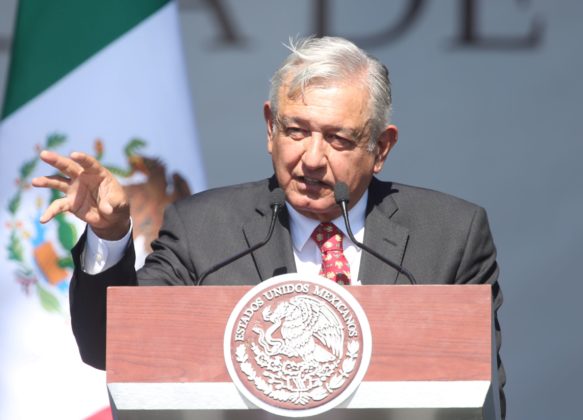 MEXICO CITY (Reuters) – Mexico’s president on Tuesday pushed back against U.S. efforts to subject his country’s labor market to external oversight under a new North American trade deal, and said the Mexican Senate should be consulted before new changes are signed off.

Mexico approved the United States-Mexico-Canada Agreement (USMCA) earlier this year, but U.S. ratification has been held up by Democratic lawmakers seeking to have stricter enforcement of new Mexican labor rules enshrined in the deal.

Speaking at a regular morning news conference, President Andres Manuel Lopez Obrador said there was no need for supervision of Mexico’s labor standards because his government was fully committed to strengthening workers’ rights.

“We don’t accept that there should be some sort of inspectors checking on whether a company is sticking to what is established by law,” the veteran leftist said.

Instead, Mexico is ready to accept panels made up of representatives of the United States, Mexico and a third country reviewing standards over an extended period, Lopez Obrador said.

Mexican senators should be entitled to give their opinion on what he described as an addendum to the accord, because they would need to ratify any additions, he said.

The president noted Mexican business associations rightly regarded the imposition of monitors on its labor market as a provision which could impede investment.

Mexico’s powerful CCE business association said it was extremely concerned about some of the U.S. labor demands, describing them as “extreme and totally unacceptable.”

“We have the impression that some U.S. players are trying to apply pressure to stop a deal,” the CCE said in a statement. “Respect for Mexican sovereignty is not negotiable.”

Seade said last week tweaks could be made to how labor disputes are handled to enable an accord, but was cautious on whether a deal was possible this year.

Gearing up for the November 2020 U.S. presidential election, Democrats have been under pressure from American trade unions to ensure that Mexico does not backslide on commitments to strengthen the rights of organized labor in the country.

Those unions have pressed for labor rules that could make lower-cost Mexico less attractive to U.S. companies, which have increased their manufacturing capacity south of the border significantly over the last two decades.

Lopez Obrador said he hoped the USMCA would be approved soon so that the accord is not increasingly caught up in the politics of the U.S. election campaign.