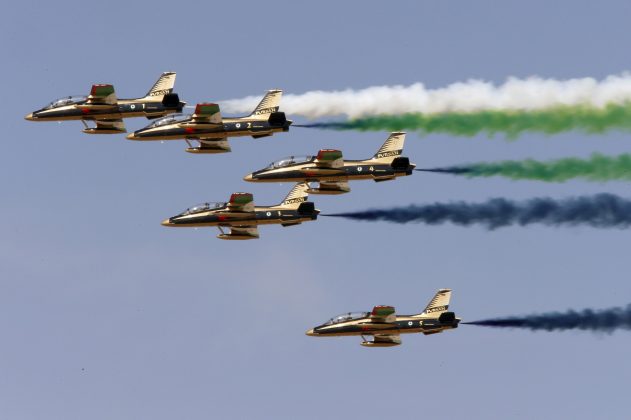 By Alexander Cornwell and Tim Hepher

DUBAI (Reuters) – Rising Middle East tensions and a corruption crackdown in Saudi Arabia will cast a shadow over next week’s Dubai Airshow, as military and aerospace leaders try to gauge whether they might prolong a weapons-buying spree in the region.

Fraying business confidence since the summer, when a sudden rift emerged between Arab powers, means the recent rapid growth of major Gulf airlines will also be under scrutiny when the Middle East’s largest industry showcase opens on Sunday.

The biennial gathering has produced a frenzy of deals in the past, especially four years ago when Dubai’s Emirates and Qatar Airways opened the show with a display of unity as they unveiled a headline-grabbing order for passenger jets.

But highlighting the current rift between Qatar and Arab nations including the United Arab Emirates, Qatar Airways’ outspoken chief executive will not be at the show, which has also been overshadowed by political upheaval in Saudi Arabia.

Distrust between Arab Gulf states, on top of escalating tensions between regional arch-rivals Saudi Arabia and Iran, is likely to keep defense spending high on the agenda at the Nov 12-16 event, to be attended by dozens of military delegates.

Saudi Arabia and allies are exploring increases in missile defenses following ballistic missile tests in Iran, which have been heavily criticized by Saudi Arabia and the United States.

“The hot area for the Middle East has been air defense,” said Sash Tusa, aerospace analyst at UK-based Agency Partners.

“While the issue of Iran’s missile tests is new, demand from the Emirates and Saudi Arabia already reflects the fact that they have been at war, in some cases on two fronts, for over two years.”

Saudi Arabia and Iran are facing off in proxy wars in Yemen and Syria. Saudi Arabia, which recently committed to tens of billions of dollars of U.S. equipment, says it has intercepted a missile fired from Yemen over Saudi capital Riyadh.

Few defense deals get signed at the show itself, but it is seen as a major opportunity to test the mood of arms buyers and their mainly Western suppliers.

But analysts say the way of doing business is up for discussion after an unprecedented crackdown on corruption in Saudi Arabia that erupted days before the show’s opening.

“The big question on many multinational company minds now … {is} will they will change the way in which decision making works when it comes to purchases of their equipment and services,” said Sorana Parvulescu, partner at Control Risks in Dubai.

Airbus and Boeing will be pushing hard for new deals on the civil side of the show at Dubai’s future mega-airport, after a pause for breath at the last edition in 2015. Boeing goes into the event with a wide lead in this year’s order race.

Emirates, the region’s biggest carrier, is expected to finalize an additional order for Airbus A380s, which if secured could be crucial to extending the costly superjumbo program.

After years of expansion, some analysts are questioning the viability of the Gulf hub model, which has seen three airlines, Emirates, Etihad Airways, and Qatar Airways, emerge as some of the world’s most influential after taking advantage of their geographic location of connecting east and west.

Leasing executives have also raised doubts over whether the Big Three will take delivery of all of the more than 500 wide-body jets currently on order from Airbus and Boeing.