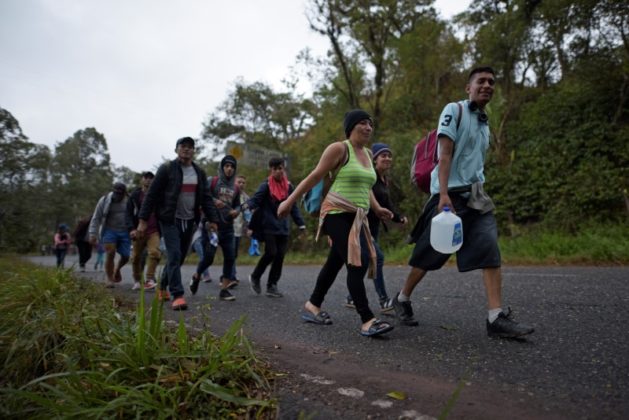 Hondurans walk along a road as they take part of a caravan of migrants heading toward the United States, in Chiquimula, Guatemala January 17, 2020. REUTERS/Fabricio Alonso

GUATEMALA CITY/MEXICO CITY (Reuters) – More than 3,500 Central Americans had poured into Guatemala by Friday in U.S.-bound gatherings known as caravans, officials said, posing a headache for the leaders of Guatemala and Mexico amid fierce U.S. pressure to curb migration.

President Donald Trump has repeatedly urged the region to prevent such groups of migrants reaching Mexico’s border with the United States, and the latest exodus from Honduras that began on Wednesday has been accompanied by U.S. border agents.

The migrants, some travelling in groups as small as a dozen people while others formed caravans of more than 100, said they planned to unite at the Guatemalan border city of Tecun Uman before crossing together into Ciudad Hidalgo, Mexico.

Mexican President Andres Manuel Lopez Obrador said his government was monitoring the situation as the migrants approached, saying there were 4,000 jobs available on the southern border, as well as shelters and medical help.

“We are keeping an eye on everything,” Lopez Obrador said during a regular press conference.

Lopez Obrador did not say if Mexico would seek to keep the migrants in the southern part of the country. Most Central Americans who leave their countries escaping poverty and violence are eager to make their way towards the United States.

Under U.S. pressure, Mexican security forces have increasingly broken up large groups as they head north.

About a thousand migrants entered Guatemala on Thursday, with local officials busing some of the migrants back to the Honduran border to fill out official paperwork, said Alejandra Mena, a spokeswoman for Guatemala’s migration institute.

“We haven’t returned people from Guatemala and we have a total of about 3,543 people who have so far crossed the border,” Mena said.

At least 600 Honduran migrants spent the night under tents in a shelter in Guatemala City on Thursday night, sleeping on mattresses.

“Now we have more experience, and we know how to treat them,” said Father Mauro Verzeletti, director of the Migrant House shelter in Guatemala City.

New leader Giammattei said a top priority would be reviewing the text of migration agreements made with the United States.

(Reporting by Sofia Menchu in Guatemala City and Drazen Jorgic in Mexico City; Editing by Dave Graham and Frances Kerry)