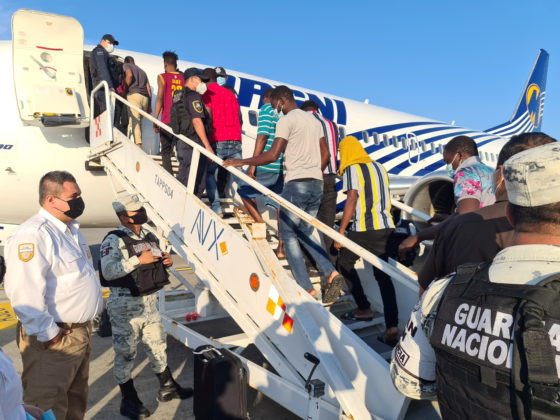 MEXICO CITY (Reuters) – Haitian migrant Nikel Norassaint did not know where he was headed when Mexican migration officials put him on a flight last week in the southeastern city of Villahermosa, days after they had detained him near the U.S.-Mexico border.

The sea below was his only clue until the plane touched down in Port-au-Prince a few hours later, his first time in the country in five years.

Norassaint, who has lived abroad for two decades, and another Haitian migrant on the flight said they were stunned to be returned to their homeland without warning.

They joined some 7,000 people expelled to Haiti from the United States after more than double that number amassed last month at an encampment in Del Rio, Texas on the Mexican border. Mexico has sent 200 people total back to Haiti as well.

Migrant advocacy groups and even a former U.S. special envoy to Haiti have condemned deportations to the Caribbean country beset by poverty and violence as inhumane, casting doubt on pledges from both the administration of U.S. President Joe Biden and Mexico’s President Andres Manuel Lopez Obrador to aid struggling migrants.

Norassaint said he had been hopeful that Biden, who had advocated for a “humane” immigration policy, had “opened the door” for migrants when he crossed into Del Rio to seek entry to the United States.

But he decamped to Mexico once word began to spread of U.S. deportations. Migration officials detained him in the city of Ciudad Acuna opposite Del Rio and then bused him 930 miles (1,500 km) south to Villahermosa.

The Mexican government’s National Migration Institute (INM) had described the Sept. 29 flight to Port-au-Prince with 70 migrants on board as “voluntary assisted return.”

But for Norassaint, who lived in the Dominican Republic for 16 years before resettling in Chile in 2018, nothing about going back to Haiti was a matter of choice.

“There’s no work, it’s unsafe, there was an earthquake, many people are dead,” he said, noting even President Jovenel Moise was assassinated in July.

Jose Miguel Vivanco, head of Human Rights Watch in the Americas, said in an opinion article on Sunday that the group has documented past instances of Mexican officials pressuring migrants to agree to “voluntary” returns, and described the country’s migration policy as “riddled with euphemisms.”

The migration institute sent another 130 migrants back to Haiti by plane on Wednesday; that flight was not labeled “voluntary.” A video of migrants boarding the plane, filmed by a migrant rights activist and posted on social media, showed one man jumping from the stairs and dashing across the tarmac.

Norassaint is now staying with family in the coastal city of Miragoane and asking relatives in the United States to send money because he cannot withdraw funds from his Chilean bank account.

His 12-year-old daughter and 17-year-old stepson are still in Mexico with their mother.

Another man on the flight, Alfred, also mourned his surprise deportation to Haiti after he left the country in 2009 to live in the Dominican Republic, and then Chile.

He hoped to reach the United States to escape worsening discrimination in Chile, but hung back in Mexico to avoid deportation.

Officials detained Alfred, who requested anonymity because of Haiti’s precarious security situation, as he was leaving his hotel in Ciudad Acuna to buy food and supplies for his wife, who is two months pregnant.

Alfred had made it to Mexico by following tips in a WhatsApp group while his wife took a plane so she would not need to risk her life crossing the jungle between Colombia and Panama.

During the week in migration detention, he was allowed to make one brief call to his wife, who said she was making her way to the northern border city of Tijuana.

“I’m about to have a heart attack, thinking I left my wife behind,” Alfred said. “We’ve been together for ten years. Look where she is now, and I’m here.”