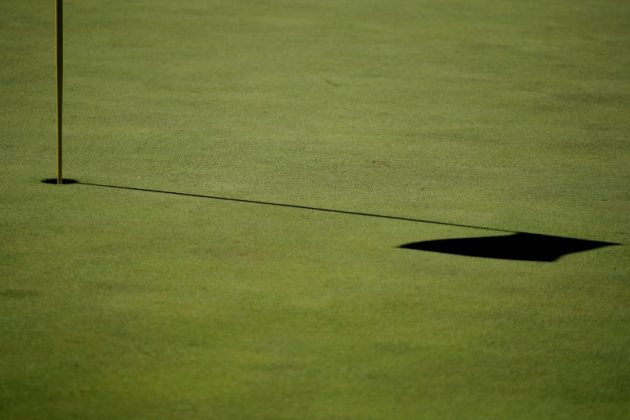 FILE PHOTO - The pin on the 6th hole casts a shadow across the green in Augusta, Georgia, U.S. April 4, 2017. REUTERS/Jonathan Ernst

(Reuters) – Sylvan Olivieri, who suffers from post traumatic stress disorder (PTSD) after serving in the Vietnam War as a U.S. Marine, is among dozens of veterans who have sought therapy on the golf course.

Olivieri, who is completely new to the game, told Reuters he learned of the Professional Golfers’ Association’s (PGA) Helping Our Patriots Everywhere (HOPE) program through his PTSD group.

“The first time was rough because I was making some minor mistakes but the instructors got me straight,” Olivieri said at the West Point Golf Course, just steps from New York’s prestigious U.S. Military Academy.

“I’m motivated. It’s all for fun, relaxation,” he said.

The U.S. Department of Veterans Affairs, which is a partner in the program with the PGA, said its goal is to help veterans assimilate back into their communities through the social interaction, mental stimulation and physical exercise that golf provides.

PTSD is caused by an overactive fear memory and includes a broad range of psychological symptoms that can develop after someone goes through a traumatic event.

A study published in JAMA Psychiatry, decades after the end of the U.S. war in Vietnam, said more than one in 10 of all American veterans continues to experience at least some symptoms of post traumatic stress disorder.

“PGA HOPE is an opportunity to bring veterans out onto the golf course and give them something to look forward to,” said Andy Crane, the head PGA professional at West Point Golf Course.

The program started in 2014 and the six-week course is now offered at more than 80 locations across the country. It is free to military veterans and fully funded by the PGA’s charitable foundation.

Bobby Colletti also turned to golf in hopes of happiness. He served in the U.S. Army in Iraq and as a contractor in Afghanistan and started abusing drugs after returning home.

“I thought at first (drugs) helped,” he said. “But then it turned into a problem and kind of just made everything worse to the point where you almost want to commit suicide because of it.”

Colletti heard about PGA HOPE while in treatment for addiction and said it “has definitely helped me along the way in my process of recovery.”

Colletti encouraged his stepfather John Edd, a Vietnam War veteran, to try golf. Edd completed the program two years ago and the two have since become regulars on the golf course.

Like Colletti, Olivieri said the course helped him heal and he now describes himself as “a pretty happy guy.”

“It puts you in a different place,” he said of golf. It makes you concentrate. You are not thinking about anything else but that ball. That period of time is PTSD-free.”