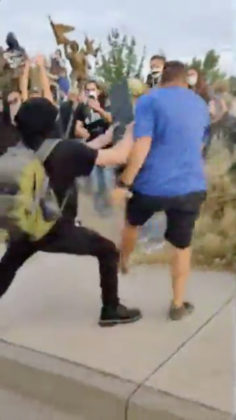 Clashes between protesters trying to pull down a statue of Juan de Onate and armed members of civilian militia group New Mexico Civil Guard is seen moments before a man was shot and wounded, in downtown Albuquerque, New Mexico, U.S. June 15, 2020, in this still image obtained from a social media video. Courtesy of Fight For Our Lives/Social Media via REUTERS

(Reuters) – Members of a heavily armed New Mexico militia blamed for sparking violence at a protest where a demonstrator was shot are trying to “prop up” white supremacy and may be connected to domestic terrorism, Albuquerque’s mayor said on Tuesday.

The peaceful protest calling for the removal of an Albuquerque statue of a Spanish conquistador turned violent on Monday after members of the New Mexico Civil Guard militia tried to keep demonstrators away from it, Albuquerque Police Commander Art Sanchez told a news briefing.

Among counter-protestors defending the statue was Steven Baca, 31, caught on video throwing a woman to the ground. Protesters then pursued him before he pulled out a handgun and shot a man, Albuquerque Mayor Tim Keller told the briefing.

Baca was not immediately available for comment and police declined to say whether he was part of the militia.

But Keller said vigilantes, militias and other armed civilians had for weeks menaced local protests over the death of George Floyd in police custody in Minneapolis. Protesters are demanding the removal of statues of New Mexico’s Spanish colonial rulers who killed and enslaved indigenous people.

“They have been there for quite some time attempting to prop up white supremacy, trying to intimidate those speaking out and they are armed with weapons,” Keller said of the groups, adding he was working with the FBI on their possible links to “domestic terrorism in our city.”

Keller said the sculpture of Juan de Oñate was removed on Tuesday for “public safety” after another statue of the colonial governor was taken down Monday in Alcalde, New Mexico.

Baca, a former city council candidate, was charged with aggravated battery with a deadly weapon for shooting Scott Williams, who was in critical condition, police said.

He won less than 6% of the votes in last year’s city council elections on a platform to encourage citizens to protect themselves with firearms, renegotiate federal restrictions on law enforcement and end sanctuary city policies.