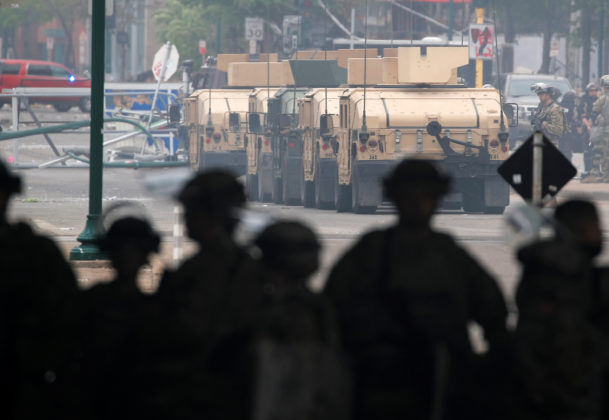 Armoured vehicles are pictured as National Guard members guard the area in the aftermath of a protest after a white police officer was caught on a bystander's video pressing his knee into the neck of African-American man George Floyd, who later died at a hospital, in Minneapolis, Minnesota, U.S., May 29, 2020. REUTERS/Carlos Barria

MINNEAPOLIS (Reuters) – The white Minneapolis policeman who pinned an unarmed black man with a knee to the throat before the man died was arrested and charged with murder, a prosecutor said on Friday, after three nights of violent protests rocked the Midwestern city.

Derek Chauvin, the officer seen on a bystander’s cellphone video kneeling on George Floyd’s neck on Monday before the 46-year-old man died, has been charged with third-degree murder and manslaughter, Hennepin County Attorney Mike Freeman told a news briefing.

“He is in custody and has been charged with murder,” Freeman said of Chauvin. “We have evidence, we have the citizen’s camera’s video, the horrible, horrific, terrible thing we have all seen over and over again, we have the officer’s body-worn camera, we have statements from some witnesses.”

The cellphone footage showed Floyd repeatedly moaning and gasping while he pleaded to Chauvin, kneeling on his neck, “Please, I can’t breathe.” After several minutes, Floyd gradually grows quiet and ceases to move.

Chauvin and three fellow officers at the scene were fired on Tuesday from the Minneapolis Police Department. The city identified the other officers as Thomas Lane, Tou Thao and J Alexander Kueng.

Freeman said the investigation into Chauvin – who, if convicted, faces up to 25 years in prison on the murder charge – was ongoing and that he anticipated charges against the other officers. He said it was appropriate to charge “the most dangerous perpetrator” first.

Earlier on Friday, Minnesota Governor Tim Walz called for an end to the violent protests, which have included arson, looting and the burning down of a police precinct, while promising a reckoning with the racial inequities behind the unrest.

“None of us can live in a society where roving bands go unchecked and do what they want to, ruin property,” Walz said. “We have to get back to that point of what caused this all to happen and start working on that.”

The protests, which threatened to stretch into a fourth night, have been driven in part by a lack of arrests in the case.

Responding to a reporter’s question about why the officers were not arrested sooner, Freeman stressed that charges in similar cases would typically take nine months to a year.

“This is by far the fastest we’ve ever charged a police officer,” said Freeman. “We entrust our police officers to use a certain amount of force to do their job, to protect us. They commit a criminal act if they use that force unreasonably.”