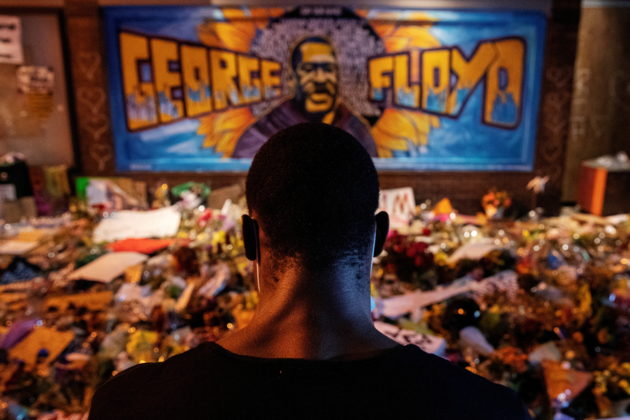 FILE PHOTO: A man recites spoken word poetry at a makeshift memorial honoring George Floyd, at the spot where he was taken into custody, in Minneapolis, Minnesota, U.S., June 1, 2020. REUTERS/Lucas Jackson/

By Jonathan Allen and Brendan O’Brien

MINNEAPOLIS (Reuters) – A Minnesota court of appeals ruled on Friday that the judge in the case against Derek Chauvin, who is facing criminal charges for the killing of George Floyd last May, must reconsider a third-degree murder charge against the former police officer.

The trial of Chauvin was due to begin with jury selection in Minneapolis on Monday, though that could be delayed as Judge Peter Cahill of the Hennepin County district court must now weigh again the reinstating of the third-degree murder charge.

Videos show Chauvin, who is white, kneeling on Floyd’s neck for nearly nine minutes on a sidewalk outside a convenience store on May 25 as Floyd, a Black man, pleaded for his life before becoming motionless. Police were arresting him on suspicion of using a counterfeit $20 bill at the store.

Floyd’s death outraged people around the world and helped fuel one of the largest protest movements ever seen in the United States, with daily demonstrations against police brutality and racism.

Lawyers for Chauvin, who could not immediately be reached for comment, have told the court they intend to argue that Chauvin acted appropriately according to his duties and training as a police officer.

State prosecutors had originally included the third-degree murder charge against Chauvin, under a statute with a complex recent legal history.

Lawyers for Chauvin had successfully argued it should be dropped on the basis that the statute requires the “death-causing act” not be directed at a single individual. But the Minnesota Court of Appeals recently ruled in a separate case that third-degree murder could be applied even if the “death-causing act” is directed at a specific person, and ruled on Friday that this precedent binds the district court.

In its order, the appeals court said Judge Cahill could still consider any additional arguments offered by Chauvin’s lawyers for having the third-degree murder charge dropped.

Three other police officers at the scene face charges of aiding and abetting the murder of Floyd in a separate trial due to start later this year. All four police officers were fired after Floyd’s death.

(Reporting by Jonathan Allen in Minneapolis and Brendan O’Brien in Chicago; Editing by Dan Grebler)