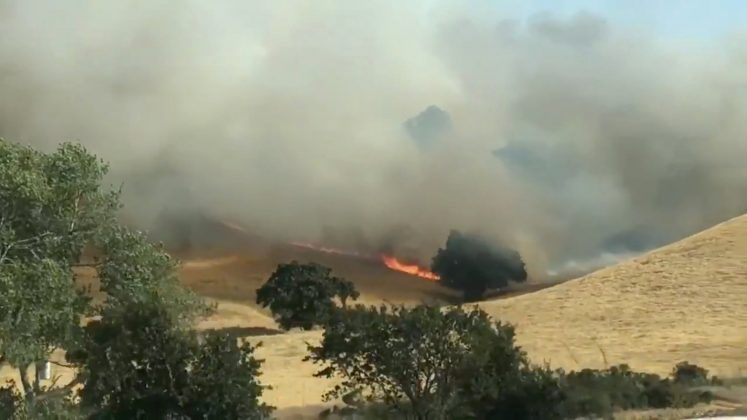 Smoke rises over a hillside on fire in Fairfield, California, the U.S., August 10, 2018, in this still image taken from a video obtained from social media. Erika Bjork/Twitter/via REUTERS

(Reuters) – Six large new wildfires erupted in the United States, pushing the number of major active blazes nationwide to over 100, with more expected to break out sparked by lightning strikes on bone-dry terrain, authorities said on Saturday.

More than 30,000 personnel, including firefighters from across the United States and nearly 140 from Australia and New Zealand, were battling the blazes that have consumed more than 1.6 million acres (648,000 hectares), according to the National Interagency Coordination Center.

“We are expecting that there will be more fire-starts today,” Jeremy Grams, lead forecaster with the National Weather Service’s Storm Prediction Center in Oklahoma, said in an interview on Saturday. 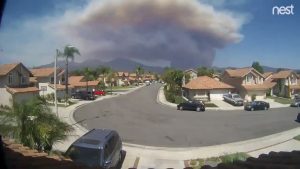 He said dry thunderstorms, which produce lightning but little rain, are expected for parts of the Rocky Mountain region, while the U.S. northwest has critical fire weather conditions that include strong winds and low relative humidity.

Firefighters were battling another day of extremely hot temperatures and strong winds on Saturday, the National Interagency Coordination Center said.

The fires have scorched states from Washington to New Mexico, with California among the hardest hit.

A mechanic helping to fight the Carr Fire near Redding in northern California was killed in a car crash on Thursday, the eighth person to die in that conflagration.

About 100 miles (160 km) southwest of the Carr Fire, about 3,500 firefighters are battling the Mendocino Complex Fire, which has burned 328,226 acres (132,828 hectares) as of Saturday and was the largest fire on record in California.