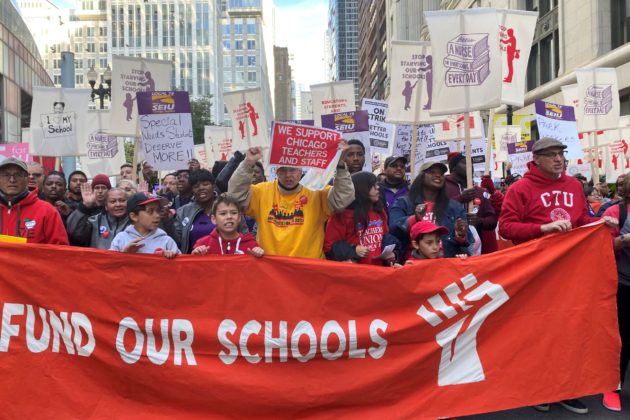 CHICAGO (Reuters) – Carmen Rodriguez, a life-long Chicagoan who lives on the city’s Southeast Side, sends her two children to a predominately Hispanic elementary school where she says teachers are struggling with class sizes of up to 40 students.

The crowded conditions at Virgil Grissom Elementary School makes Rodriguez, a 45-year-old stay-at-home mom, sympathetic to Chicago’s 25,000 teachers, who have authorized a strike against the public school system unless the two sides can reach a contract deal by Thursday.

“I don’t think the teachers are being unreasonable whatsoever, because they are fighting for more than just money,” she said.

Interviews with about two dozen parents of children in the system suggest Rodriguez’s point of view is widely shared, even though most parents are uncomfortable with the prospect of a strike. Thousands of teacher staged a one-day walkout in 2016 to protest the lack of a contract at that time and failures to stabilize the finances.

“They are fighting for the kids. Someone has to stand up for these things,” said yoga instructor Angela Steffensen, 34, after dropping her child off at school. “But a strike sucks for everybody.”

A strike would mark the latest in a recent wave of work stoppages in school districts across the United States in which demands for higher salaries and benefits have receded to the background.

Instead, in Chicago and elsewhere, teachers have emphasized the need for more resources for under-funded schools, framing their demands as a call for social justice that resonates with parents, said Jon Shelton, a justice studies professor at University of Wisconsin-Green Bay.

“There are a lot of eyes on this strike,” he said. If Chicago teachers are successful “it shows that this model of organizing and working with the community is a significant way to build power for teachers.”

The district has said it is making progress to cut classroom size and has offered to spend $10 million to provide 200 teaching assistants for the most overcrowded schools. It also pledged to double the number of social workers and nurses over the next five years as more qualified applicants and funding become available.

“We expressed a willingness to find solutions on these two core issues that would be written directly into the contract,” Mayor Lori Lightfoot and Janice Jackson, chief executive of Chicago Public Schools (CPS), said in a statement.

Overcrowding and a shortage of support staff are reflections of a systemic inequality throughout the system, according to many parents and educators.

CPS provides 67% of what it needs to educate its 361,000 students, according to Advance Illinois, an educational policy and advocacy organization.

To make up some of the difference, parent organizations in some schools, mostly in more affluent neighborhoods, provide additional funds.

As a consequence, the funding shortfall hits low-income and special-needs pupils the hardest, especially when it comes to class size and support staff, advocates and parents said.

“We are always getting the short end of the stick,” said Chamala Jordan, 43, who lives on the South Side. “There is always an explanation from CPS for why class sizes are astronomic and there is always an excuse to why they are under resourced.”

Nearly one in four elementary classrooms have 35 or more students. Many of those are in low income and minority schools, the union said, citing district data.

Teachers want mandatory maximums of 20 students in kindergarten classrooms, 24 children in first through third grade classes and 28 in grades fourth through eighth and 28 for core classes in high school. The current limits are higher and principals are allowed to deviate from them.

The union wants the number of social workers, counselors and other clinicians to meet the recommended ratios set by each profession’s national associations.

The district has a single guidance counselor for every 475 students, on par with the national ratio. But for nurses and social workers, it lags the recommendations badly.

Even so, not all parents are sympathetic with the teachers.

Willie Preston, a 34-year-old father of six, sees bad blood between the teachers union and the mayor behind the strike threat. Lightfoot won election last April without the union’s endorsement.

“They are using our children as leverage, bargaining chips,” he said.

Despite the political overtones, many parents said they have focused on the harm that overcrowding and the lack of support staff does to their children’s education.

“Smaller classrooms mean more attention to your child and more attention means that they learn better … and they can excel,” said Stefanie Gambrell, 48, the mother of a child in a CPS school.

(Reporting by Brendan O’Brien in Chicago; Editing by Frank McGurty and Nick Zieminski)