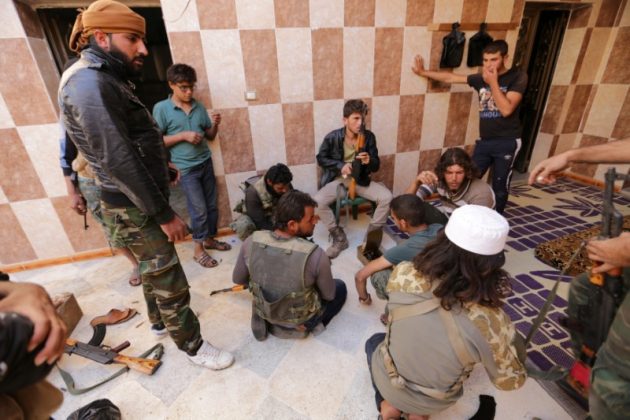 Rebel fighters of 'Al-Sultan Murad' brigade gather on the outskirts of the northern Syrian town of Shawa, which is controlled by Islamic State militants, in Aleppo Governorate, Syria, September 28, 2016. REUTERS/Khalil Ashawi

By Jonathan Landay and Tom Perry

WASHINGTON/BEIRUT (Reuters) – The Kremlin vowed on Thursday to press on with its assault in Syria, while U.S. officials searched for a tougher response to Russia’s decision to ignore the peace process and seek military victory on behalf of President Bashar al-Assad.

Moscow and Damascus launched an assault to recapture the rebel-held sector of Aleppo this month, abandoning a new ceasefire a week after it took effect to embark on what could be the biggest battle of a nearly six-year war.

Rebel fighters have launched an advance of their own in countryside near the central city of Hama, where they said they made gains on Thursday.

The United States and European Union accuse Russia of torpedoing diplomacy to pursue military victory in Aleppo, and say Moscow and Damascus are guilty of war crimes for targeting civilians, hospitals and aid workers to break the will of 250,000 people living under siege inside Syria’s largest city.

EU foreign affairs chief Federica Mogherini called the air strikes in Aleppo a “massacre” and said European governments were considering their response. Russia and the Syrian government say they are targeting only militants.

U.S. Secretary of State John Kerry, who personally negotiated the failed truce in talks with Russia despite scepticism from other senior U.S. officials, has said Washington could walk away from diplomacy unless the fighting stops.

He has called for a halt to flights, a step rejected by Moscow. Kremlin spokesman Dmitry Peskov said on Thursday Russia would “continue the operation of its air force in support of the anti-terrorist activity of Syria’s armed forces”.

Peskov said Washington was to blame for the fighting, by failing to meet an obligation to separate “moderate” rebel fighters from terrorists.

“In general, we express regret at the rather non-constructive nature of the rhetoric voiced by Washington in the past days.”

U.S. officials are considering tougher responses to the Russian-backed Syrian government assault, including military options, although they have described the range of possible responses as limited and say risky measures like air strikes on Syrian targets or sending U.S. jets to escort aid are unlikely.

Recapturing Aleppo would be the biggest victory of the war for government forces, and a potential turning point in a conflict that until now most outside countries had said would never be won by force.

The multi-sided civil war has killed hundreds of thousands of people, made half of Syrians homeless, and allowed much of the east of the country to fall into the hands of Islamic State jihadists who are enemies of all other sides.

Aleppo has been divided into government and opposition sectors for four years, and its rebel zone is now the only major urban area still in the hands of anti-Assad fighters supported by the West and Arab states. The government lay siege to it in July, cutting off those trapped inside from food and medicine.

The last week of bombing has killed hundreds of people and left many hundreds more wounded, with no way to bring in medical supplies. There are only around 30 doctors inside the besieged zone. The two biggest hospitals were knocked out of service by air strikes or shelling on Wednesday.

Russia says the only way to defeat Islamic State is to support Assad. Washington says the Syrian president has too much blood on his hands and must leave power.

Washington is bombing Islamic State targets in the east but has otherwise avoided any direct participation in the civil war in the rest of the country, leaving the field open to Russia, which joined the war a year ago tipping the conflict in favor of its ally Assad.

Relations between Moscow and Washington are already at their worst since the Cold War, with the United States and European Union having imposed economic sanctions over Russia’s annexation of territory from Ukraine and support for separatists there.

The ferocity of the assault on Aleppo is driving many of the Western-backed anti-Assad groups to cooperate more closely with jihadist fighters, the opposite of the strategy Washington has hoped to pursue, rebel officials told Reuters.

In Aleppo, rebels fighting under the Free Syrian Army banner are sharing operational planning with Jaish al-Fatah, an alliance of Islamist groups that includes the former Syrian wing of al Qaeda.

Meanwhile, in nearby Hama province, FSA groups armed with U.S.-made anti-tank missiles are taking part in a major offensive with the al Qaeda-inspired Jund al-Aqsa group that has diverted some of the army’s firepower from Aleppo.

The FSA rebels have deep ideological differences with the jihadists, and have even fought them at times, but say survival is the main consideration.

“At a time when we are dying, it is not logical to first check if a group is classified as terrorist or not before cooperating with it,” said a senior official in one of the Aleppo-based rebel factions. “The only option you have is to go in this direction.”

Two U.S. officials said the speed with which the diplomatic track collapsed in Syria and pro-government forces advanced in Aleppo had caught some in the administration off guard.

Obama administration officials have begun considering responses, including military options, U.S. officials said. The new discussions were being held at “staff level,” and had yet to produce any recommendations to Obama.

Even administration advocates of a more muscular U.S. response said on Wednesday that it was not clear what, if anything, the president would do, and that his options “begin at tougher talk”, as one official put it.

One official said that before any action could be taken, Washington would first have to “follow through on Kerry’s threat and break off talks with the Russians” on Syria.

OPTIONS ON THE TABLE

Possible responses include allowing Gulf allies to supply rebels with more sophisticated weaponry, or carrying out a U.S. air strike on a Syrian government air base, viewed as less likely because of the potential for causing Russian casualties, the officials told Reuters, speaking on condition of anonymity.

The options being weighed are limited in number and stop well short of any large-scale commitment of U.S. troops.

One of the officials said the list of options included supporting rebel counter-attacks elsewhere with additional weaponry or even air strikes, which “might not reverse the tide of battle, but might cause the Russians to stop and think”.

Another official said any weapons supplied to rebels would not include shoulder-fired anti-aircraft missiles, which rebels say they need to fight the Russian air force but which Washington fears could end up in the hands of militants.

Other ideas under consideration include sending more U.S. special operations forces to train and advise Kurdish and Syrian Arab rebel groups, and deploying additional American and allied naval and airpower to the eastern Mediterranean.

U.S. officials had considered a humanitarian airlift to rebel-held areas, which would require escorts by U.S. warplanes, but this has been deemed too risky and “moved down the list”, one official said.