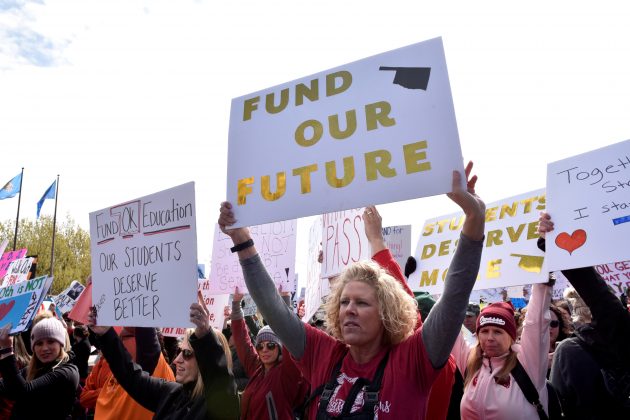 WASHINGTON (Reuters) – Ninety-four percent of U.S. public school teachers spend their own money on classroom supplies without reimbursement, according to a Department of Education survey on Tuesday that follows protests by educators who are asking for more pay and funding.

Teachers in the 2014-15 school year on average spent $479 out of their own pockets on such supplies as chalk, pencils and construction paper, while about 7 percent spent more than $1,000, the report by the department’s National Center for Education Statistics said.

Spending was more common in high-poverty schools than in wealthier ones, the survey showed. Just over half of U.S. public school students are eligible for the free lunch program, which is seen as a marker for poverty.

The study follows walkouts by teachers in West Virginia, Kentucky and Oklahoma seeking better pay, benefits and funding. After the biggest teachers’ strike in U.S. history, Arizona’s governor last week signed a budget bill that will boost pay by 20 percent.

In North Carolina, thousands of teachers are expected to rally on Wednesday in Raleigh, the state capital, to seek more school funding from lawmakers.

A 2002 law allows teachers to deduct up to $250 from their U.S. taxes for unreimbursed spending on classroom materials. Legislation introduced by Representative Anthony Brown, a Maryland Democrat, and 35 co-sponsors would double the deduction and index it to inflation.

The average U.S. teacher earned $56,383 in the 2012-13 school year, marking a 1.3 percent drop from the turn of the millennium, Education Department statistics show.

Randi Weingarten, president of the American Federation of Teachers, said walkouts by teachers should not be necessary to address lack of spending on public education.

“There is no other job I know of where the workers subsidize what should be a cost borne by an employer as a necessary ingredient of the job,” she said in a statement.

The Education Department said the study was based on a nationally representative sample of public schools, teachers and principals in the 50 states and the District of Columbia.