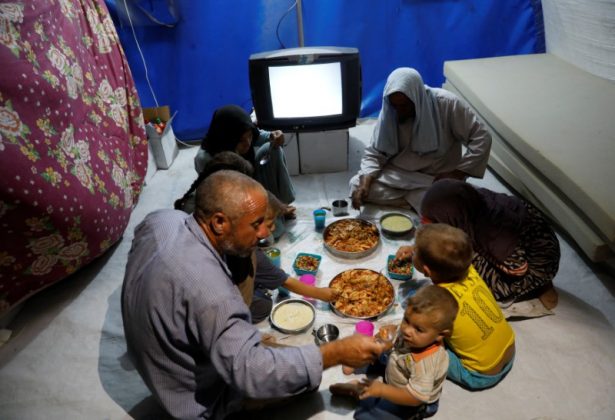 Displaced Iraqi family from Mosul eat a simple meal for their Iftar, during the Muslim holy month of Ramadan at a refugee camp al-Khazir in the outskirts of Erbil, Iraq June 10, 2017. Picture taken June 10, 2017. REUTERS/Erik De Castro

BAGHDAD (Reuters) – For Salam, a resident in the Islamic State-held Old City of Mosul, the holy fasting month of Ramadan this year is the worst he’s seen in a lifetime marked by wars and deprivations.

“We are slowly dying from hunger, boiling mouldy wheat as soup” to break the fast at sunset, the 47 year-old father of three said by phone from the district besieged by Iraqi forces, asking to withhold his name fearing the militants’ retribution.

The only wish he makes in his prayers is for his family to survive the final days of the self-proclaimed caliphate declared three years ago by IS’s leader Abu Bakr al-Baghdadi from a nearby mosque.

The eight-month old U.S.-backed campaign to capture Mosul, IS’s de-facto capital in Iraq, reached its deadliest phase just as the holy Muslim month started at the end of May, when militants became squeezed in and around the densely populated Old City.

Up to 200,000 people are trapped behind their lines, half of them children, according to the United Nations.

Hundreds have been killed while trying to escape to government-held lines, caught in the cross-fire or gunned down by Islamic State snipers. The militants want civilians to remain in areas under their control to use them as human shields.

Many bodies of the dead remain in the street near the frontlines. Four of them are relatives of Khalil, a former civil servant who quit his job after IS took over Mosul.

“Daesh warned us not to bury them to make them an example for others who try to flee,” he said, using an acronym for Islamic State.

Those who decide not to run the risk of fleeing are living in fear of getting killed or wounded in their homes, with little food and water and limited access to healthcare.

“Seeing my kids hungry is real torture,” said Salam, who closed his home appliances shop shortly after the start of the offensive as sales came to a complete stop.”I wish the security forces would eliminate all Daesh fighters in a flash; I want my family to have normal life again.”

Where food can be found, the price has risen more than 20-fold. A kilo of rice is selling for more than $40. A kilo of flour or lentils is $20 or more.

The sellers are mainly households who stockpiled enough food and medicine to dare sell some, but only to trusted neighbors or relatives, or in return for items they need. If militants find food they take it.

Residents fill water from a few wells dug in the soil. The wait is long and dangerous as shelling is frequent.

“The well-water has a bitter taste and we can smell sewage sometimes, but we have to drink to stay alive,” said Umm Saad, a widow and mother of four, complaining that the militants are often seen with bottled water and canned food.

“We have been under compulsory fasting even before the start of Ramadan,” she said. “No real food to eat, just hardened old bread and mouldy grains.”

About 800,000 people, more than a third of the pre-war city’s population, have already fled, seeking refuge either with friends and relatives or in camps. But in areas still held by the militants escape has become harder than ever.

“Fleeing is like committing suicide,” said Khalil, the ex-civil servant, who lives near the medieval Grand al-Nuri Mosque, the offensive’s symbolic focus, where Baghdadi proclaimed himself caliph.

IS’s black flag has been flying over its landmark leaning minaret since June 2014, when the Iraqi army fled in the face of the militants, giving them their biggest prize, a city at least four times bigger than any other they came to control in both Iraq and neighboring Syria.