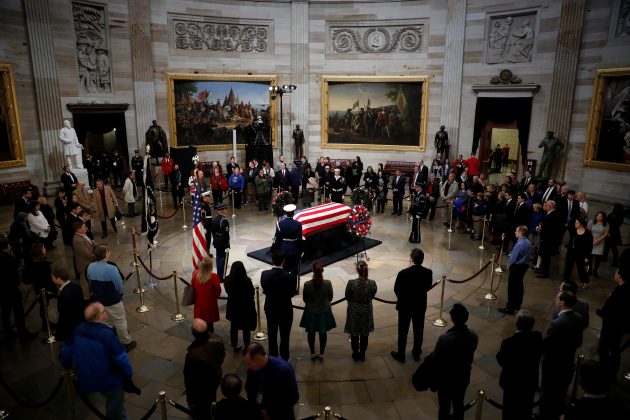 Mourners pay their respects at the casket of former U.S. President George H.W. Bush as it lies in state inside the U.S. Capitol Rotunda on Capitol Hill in Washington, U.S., December 4, 2018. REUTERS/Aaron P. Bernstein

WASHINGTON (Reuters) – The historic and ornate U.S. Capitol Rotunda hosted mourners on Tuesday paying respects to the 41st U.S. president, George H.W. Bush, who died last week at the age of 94 and will be buried on Thursday in his home state of Texas.

A casket bearing Bush’s body arrived on the Capitol grounds at sunset on Monday for a ceremony led by congressional leaders who celebrated the life of the Republican president and father of the 43rd president, George W. Bush.

President Donald Trump, a fellow Republican, plans to visit with the mourning family at Blair House, near the White House, on Tuesday, while first lady Melania Trump will give a tour to former first lady Laura Bush of the White House’s holiday decorations.

“The elegance & precision of the last two days have been remarkable!” Trump wrote in a tweet.

At the Capitol, the public was given 36 hours to file past the elder Bush’s flag-draped coffin. Early on Wednesday, it will be transported to the Washington National Cathedral for a memorial service.

During his four years in the White House, Bush used U.S. military power to end Iraq’s occupation of Kuwait, steered the United States through the end of the Cold War and condemned China’s violent reaction to pro-democracy demonstrators in Beijing.

He was dogged by domestic problems, including a sluggish economy. When he ran for re-election in 1992, he was pilloried by Democrats and many Republicans for violating his famous 1988 campaign promise: “Read my lips, no new taxes.”

Bush is the 12th U.S. president to lie in state in the Capitol Rotunda. The first was Abraham Lincoln following his assassination in 1865.

On Monday, mourners lined up to enter the Capitol for the public viewing that began later that evening, including Theresa Murphy, 64, a retired New York high school history teacher.

“His character speaks most, because of his character, how he handled so many important points in our history. The Iraq war, the falling of the Berlin Wall, he wasn’t (saying) that’s all about me,” Murphy said, adding: “Can you imagine what it would look like if our president today did that?”

The federal government and some financial exchanges will be closed on Wednesday for a day of mourning.