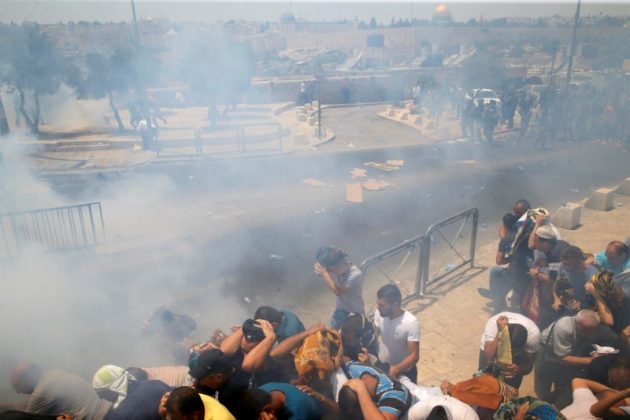 By Luke Baker and Ori Lewis

JERUSALEM (Reuters) – Israeli police tightened security around Jerusalem’s Old City on Friday as Muslims protested against its installation of metal detectors at a flashpoint shrine holy to both Jews and Muslims.

There have been daily confrontations between Palestinians hurling rocks and Israeli police using stun grenades since the detectors were placed at the entrance to the shrine on Sunday, after the killing of two Israeli policemen.

In protest, hundreds of worshippers gathered at various entrances to the compound, known to Muslims as the Noble Sanctuary and to Jews as Temple Mount, before Friday prayers, but refused to enter, preferring to pray outside.

Muslim leaders and Palestinian political factions had urged the faithful to gather for a “day of rage” on Friday against the new security policies, which they see as changing delicate agreements that have governed the holy site for decades.

But by early afternoon, with police mobilizing extra units and placing barriers to carry out checks at entrances to the Old City, there had been little violence.

Access to the shrine for Muslims was limited to men over 50 as well as women of all ages. Roadblocks were in place on approach roads to Jerusalem to stop buses carrying Muslims to the site.

At one location near the Old City, stone throwers did try to break through a police line, and police used stun grenades.

The Palestinian Red Crescent ambulance service said at least 30 people had been hurt, two seriously and some suffered from tear gas inhalation.

The hill-top compound, which contains the Dome of the Rock and al-Aqsa Mosque, has long been a source of religious friction. Since Israel captured and annexed the Old City, including the compound, in the 1967 Middle East war, it has also become a symbol of Palestinian nationalism.

“This is our place of prayer, we have sovereignty here,” Salaam added.

On Thursday, Turkish President Tayyip Erdogan called Israeli President Reuven Rivlin to press for the removal of the metal detectors.

Nickolay Mladenov, the United Nations’ special coordinator for long-stalled Israel-Palestinian peace talks, appealed for calm and the White House urged a resolution. Jordan, which is the ultimate custodian of the holy site, has also been involved in mediation efforts.

But Netanyahu’s 11-member security cabinet decided in a late-night meeting to keep the metal detectors in place to ensure no weapons were smuggled in, a week after three Arab-Israeli gunmen shot dead two Israeli policemen in the vicinity of the complex.

Far-right members of Netanyahu’s government – which relies on religious and right-wing parties for support – had publicly urged him to keep the devices in place.

“Israel is committed to maintaining the status quo at the Temple Mount and the freedom of access to the holy places,” the security cabinet said in a statement.

“The cabinet has authorized the police to take any decision in order to ensure free access to the holy places while maintaining security and public order.”

As well as anger at having to submit to Israeli security policies, Palestinians are alarmed at what they see as a slow chipping away at the status quo at the Noble Sanctuary.

Since Ottoman times, while Jews are permitted to visit the area – considered the holiest place in Judaism, where an ancient temple once stood – only Muslims are allowed to pray there.

Over the past decade, however, visits by religious-nationalist Jews have increased sharply and some attempt to pray. While police are supposed to eject them if they do, the rules are not always enforced, fuelling Muslim anger.

In 2000, a visit by then-Israeli opposition leader Ariel Sharon triggered clashes that spiraled into the second Intifada, or uprising, when an estimated 1,000 Israelis and 3,000 Palestinians were killed in four years of violence.