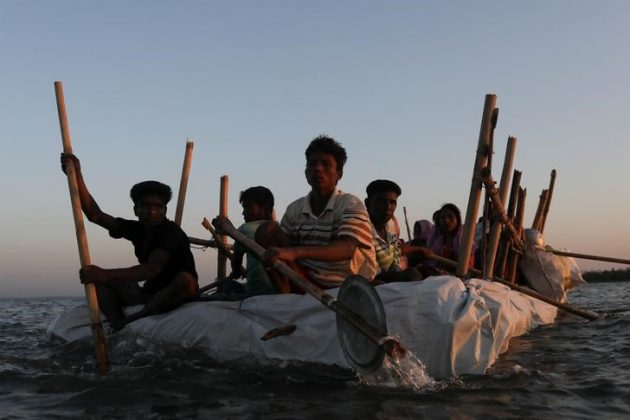 Rohingya refugees sail on an improvised raft across the Naf River to reach Bangladesh, in Teknaf, Bangladesh, November 29, 2017. REUTERS/Susana Vera

GENEVA (Reuters) – Myanmar’s security forces may be guilty of genocide against the Rohingya Muslim minority, the United Nations’ top human rights official said on Tuesday, adding that more were fleeing despite an agreement between Myanmar and Bangladesh to send them home.

Zeid Ra’ad al-Hussein, U.N. High Commissioner for Human Rights, said that none of the 626,000 Rohingya who have fled violence since August should be repatriated to Myanmar unless there was robust monitoring on the ground.

Myanmar’s ambassador Htin Lynn said that his government was working with Bangladesh to ensure returns of the displaced in about two months and “there will be no camps”.

Zeid, who has described the campaign in the past as a “textbook case of ethnic cleansing”, was addressing a special session of the U.N. Human Rights Council in Geneva called by Bangladesh.

He described “concordant reports of acts of appalling barbarity committed against the Rohingya, including deliberately burning people to death inside their homes, murders of children and adults; indiscriminate shooting of fleeing civilians; widespread rapes of women and girls, and the burning and destruction of houses, schools, markets and mosques.”

“Can anyone – can anyone – rule out that elements of genocide may be present?” he told the 47-member state forum.

Zeid urged the Council to recommend that the U.N. General Assembly establish a new mechanism “to assist individual criminal investigations of those responsible”.

Prosecutions for the violence and rapes against Rohingya by security forces or by civilians “appear extremely rare”, Zeid said.

Marzuki Darusman, head of an independent international fact-finding mission on Myanmar, said by video from Malaysia: “We will go where the evidence leads us…Our focus is on facts and circumstances of allegations in Myanmar as a whole since 2011.”

His team has interviewed Rohingya refugees including children in Cox’s Bazar in Bangladesh, who recounted “acts of extreme brutality” and “displayed signs of severe trauma”, he said.

Myanmar has not granted the investigators access to Rakhine, the northern state from which the Rohingya have fled, he said. “We maintain hope that it will be granted early in 2018.”

Pramila Patten, special representative of the Secretary-General on Sexual Violence in Conflict, who interviewed survivors in Bangladesh in November, said: “I heard the most heart-breaking and horrific accounts of sexual atrocities reportedly committed in cold blood out of a lethal hatred of these people solely on the basis of their ethnicity and religion”.

The United Nations defines genocide as acts intended to destroy a national, ethnic, racial or religious group in whole or in part. A U.N. convention requires all countries to act to halt genocide and to punish those responsible.