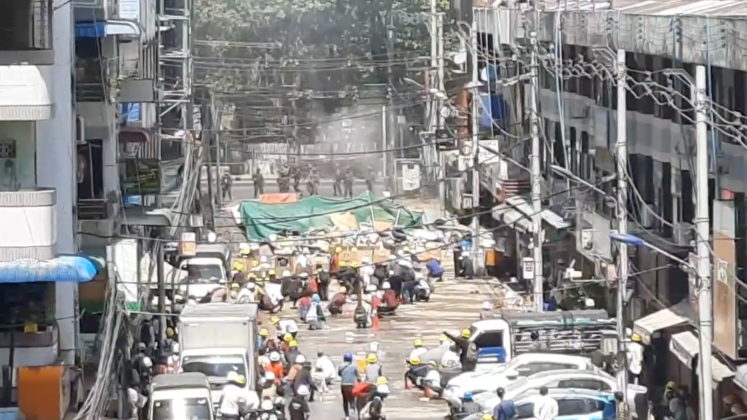 Protesters hide behind a barricade as the tear gas and smoke rise amongst them during a demonstration against the military coup in Yangon, Myanmar March 4, 2021 in this still frame obtained from a social media video. KHIT THIT MEDIA via REUTERS

(Reuters) – Police in Myanmar broke up demonstrations in several places with tear gas and gunfire on Thursday as protesters took to the streets again undeterred by the rising death toll in a crackdown on opponents of last month’s military coup.

The incidents followed the bloodiest day since the military overthrew the elected government of Aung San Suu Kyi on Feb. 1, with the United Nations special envoy for Myanmar saying 38 people had been killed on Wednesday.

The U.N. human rights chief, Michelle Bachelet, called on the security forces to halt what she called their “vicious crackdown on peaceful protesters”.

“Myanmar’s military must stop murdering and jailing protesters,” Bachelet said in a statement.

A spokesman for the ruling military council did not answer telephone calls seeking comment.

The army seized power alleging fraud in an election won by Suu Kyi’s party last November, although the electoral commission dismissed its claims. It has defended measures to quell protests and said it will not let Myanmar’s stability be threatened.

Activists said they refused to accept military rule and the new elections promised by the junta, voicing determination to press for the release of the detained Suu Kyi, 75, and recognition of her election victory.

“We know that we can always get shot and killed with live bullets but there is no meaning to staying alive under the junta,” activist Maung Saungkha told Reuters.

Police opened fire and used tear gas to break up protests in Yangon and the central town of Monywa, witnesses said. Police also fired in the town of Pathein, west of Yangon, and used tear gas in Taunggyi in the east, media reported.

Big crowds also gathered peacefully for rallies elsewhere, including the second city of Mandalay and in the historic temple town of Bagan, where hundreds marched carrying pictures of Suu Kyi and a banner saying: “Free our leader,” witnesses said.

“EVERYTHING WILL BE OK” PROTESTER MOURNED

Hundreds of people attended the funeral of a 19-year-old woman shot dead in Mandalay on Wednesday, who was photographed wearing a T-shirt that read “Everything will be OK”..

On Wednesday, police and soldiers had opened fire with live rounds with little warning in several cities and towns, witnesses said. The United Nations said at least 38 people were killed.

“Myanmar’s security forces now seem intent on breaking the back of the anti-coup movement through wanton violence and sheer brutality,” said Richard Weir, a researcher at Human Rights Watch.

Suu Kyi’s National League for Democracy party said in a statement that flags would fly at half mast at its offices to commemorate the dead.

The U.N. Security Council is due to discuss the situation on Friday in a closed meeting, diplomats said.

The U.S. State Department said Washington was “appalled” by the violence and was evaluating how to respond. British Prime Minister Boris Johnson said on Thursday he was horrified by the escalation of violence and killing of protesters.

The European Union suspended support for development projects to avoid providing financial assistance to the military, officials said on Thursday. The support in past years has involved more than 200 million euros ($240.7 million) in separate programs often running for four years.

Myanmar’s generals have long shrugged off outside pressure.

The U.N. special envoy for Myanmar, Christine Schraner Burgener, said on Wednesday she had warned deputy military chief Soe Win that the army was likely to face strong measures from some countries over the coup.

“The answer was: ‘We are used to sanctions, and we survived’,” she told reporters in New York. “When I also warned they will go (into) isolation, the answer was: ‘We have to learn to walk with only few friends’.”

The United States has told China, which has declined to condemn the coup, it expects it to play a constructive role. China has said stability is a top priority in its strategic neighbor.