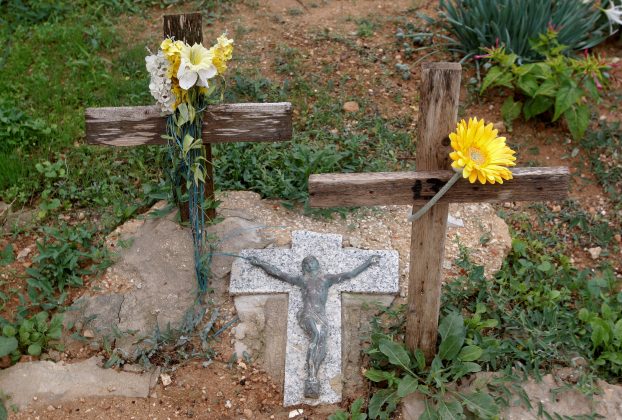 Wooden crosses with numbers instead of names are seen in a cemetery in Lampedusa, Italy, October 6, 2013. REUTERS/Antonio Parrinello/File Photo

By Isla Binnie and Michele Kambas

ROME/ATHENS (Reuters) – Mose tapped the screen of his mobile phone to zoom in on a photograph of his wife, Yordanos, pointing to a mole under her eyebrow.

“She has a recognizable mark here,” the 26-year-old Eritrean said in a park in Rome; after fleeing compulsory military service back home, Mose now lives in an Italian reception center for migrants.

He has not seen Yordanos since May 26 when they left Libya, packed by people smugglers on to two separate boats bound for Italy. He was rescued, but her boat sank in the Mediterranean.

Helping people like Mose find out their loved ones’ fate is becoming ever more pressing as Europe’s migrant crisis drags on in its third year and the death toll rises.

Teams of forensic scientists in Italy and Greece are painstakingly trying to identify the victims of drowning found at sea, washed up on shores or recovered from wrecks.

However, there is no common practice to collect information about these deaths between states or even sometimes within the same country, and a plan by the Dutch-based International Commission on Missing Persons (ICMP) to start tracing lost migrants is still awaiting funding.

Kathryne Bomberger, director general of the ICMP, said the problem was too big to be left solely to front-line countries such as Italy and Greece.

“This is a complex, international problem,” she said, as the task of identification and notification involves tracking down relatives who may be in their home countries, in refugee camps, or building new lives in the likes of Germany or Sweden.

“We are ready to go, we have the necessary database systems, we have an agreement with Italy, we have done our homework. We just need the financial support.”

The ICMP and International Organization for Migration (IOM) are calling for a strategy to process the data, and a system for repatriating migrants’ remains.

Mose, who withheld his surname for fear of reprisals from Eritrean authorities, clings to the hope that Yordanos was rescued and that she could be recognised from the photograph.

If she did not survive, and her body was recovered, her remains are likely to have been buried in one of hundreds of numbered graves in Sicily or the southwestern Calabria region for migrants who have drowned.

Both in Italy and Greece, which migrants have also tried to reach on a shorter but still dangerous sea crossing from Turkey, the forensic experts are trying to replace the numbers with names.

Sometimes they succeed, despite the practical and financial problems, as in the case of a baby boy found floating near the Greek island of Samos in January.

The child, no more than six months old, had been lost in a shipwreck on Oct. 29, 2015 when 19 migrants drowned. For over two months, his body drifted more than 150 km (95 miles) north until it was recovered from the water.

In the end, police identified the little boy from a DNA sample given by his Syrian father, who was among 139 people rescued when the boat sank in the Aegean off the island of Kalymnos.

“It is the least we can do for these people, under very difficult circumstances,” said Penelope Miniati, director of the Greek police’s Forensic Sciences Division.

For some, the tragedies recall Greece’s own history of migration, including in the 1950s and ’60s when many escaped poverty for a new life in countries such as the United States, Canada and Australia, breaking up families who sometimes lost contact with each other.

“We are Greeks, we also migrated and some people were lost in the journey … and each time people wondered what had happened to them,” said Miniati.

More than three quarters of the 4,027 migrant and refugee deaths worldwide in 2016 so far happened in the Mediterranean, according to the IOM.

Most died between Libya and Italy. Hundreds also drowned on the Turkey-Greece route, although arrivals have fallen sharply since a deal between the European Union and Ankara on curbing the flow in March.

Many shipwreck victims are never recovered, but about 1,500 have been brought to Italy since 2013. So far, just over 200 have been identified.

In a “policy vacuum” the action in Italy and Greece has been driven by “improvisation”, the IOM said in June in a joint report with City University London and the University of York.

The report praised a deal that Italy’s special commissioner for missing persons struck with a university laboratory, which provides free forensic work, and the interior ministry, to adopt a protocol to identify victims and inform relatives.

The commissioner records details of corpses and sends notices through embassies and humanitarian organizations asking survivors for photographs of the missing, and personal effects such as toothbrushes that could harbor DNA.

In Athens, Miniati’s division has a database with information on 647 people who need identifying, about 80 percent of them the nameless dead of the migrant crisis.

People who drown and stay trapped underwater for months are often unrecognizable, so accounts of scars, tattoos and dental cavities help. Some people come to Italy to look for missing relatives in the commissioner’s files and some take DNA tests.

Deputy Italian Commissioner Agata Iadicicco said a shared international database would make it easier to reach migrants’ home countries and diasporas across Europe. “We need money to standardize this model and to involve all the migrant communities that mainly live in northern Europe,” she said.

With no sign of a let-up in the perilous voyages from North Africa, Italy feels that fellow EU countries should pull their weight more in handling the crisis.

The issue of graves for the victims has become caught up in the ill-feeling. Prime Minister Matteo Renzi said he sent the navy to raise a ship that sank last year and bury the more than 450 people found in the wreck to “tell Europe which values really count”.

For Mose, whose young son is still in Eritrea, even being sure Yordanos had died would be some comfort. “If I find her body, I can find some serenity,” he said. “If my son asks whether his mother is, at least I can say where she is buried.”