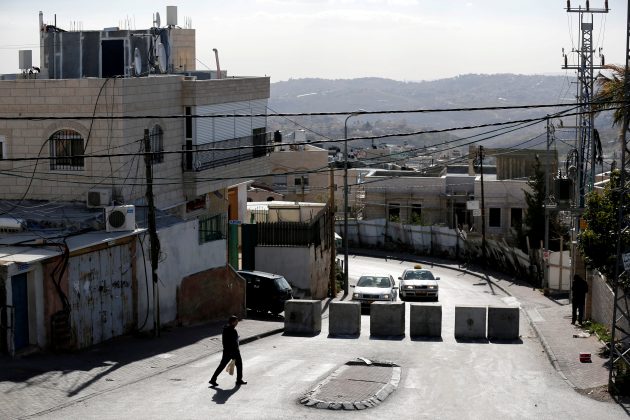 FILE PHOTO: A man walks next to a newly erected concrete barriers at the entrance to Jabel Mukaber, in an area of the West Bank that Israel captured in a 1967 war and annexed to the city of Jerusalem, the morning after a Palestinian rammed his truck into a group of Israeli soldiers on a popular promenade in Jerusalem January 9, 2017. REUTERS/Amir Cohen/File Photo

JERUSALEM (Reuters) – Attacks like the one in London are almost impossible to stop, the former head of VIP protection at Israel’s Shin Bet security agency said on Thursday, acknowledging that even Israel struggled to prevent them.

Despite building a barrier intended to prevent Palestinian attackers protesting against occupation entering from the West Bank, Israel has suffered dozens of low-tech vehicle or knife attacks in the last two years on civilians, police and soldiers.

“What happened in London was basically in a public area and, when it comes to public areas, it’s nearly impossible (to prevent),” said Shlomo Harnoy, who spent 25 years in the Shin Bet, sometimes coordinating protection for U.S. presidential visits. He now directs Sdema Group, a global security consultancy.

“There are ideas to build public areas to counter specific security threats, especially when it comes to explosive materials, but when it’s an attack on a bridge or something like that, it’s very difficult.”

In Wednesday’s attack, the suspect drove his rented vehicle into pedestrians on Westminster Bridge before stabbing a policeman at the entrance to the Houses of Parliament. Four people were killed and at least 40 injured. The attacker, identified by police as British-born, was shot dead.

In Israel, Palestinians have rammed cars and trucks into civilians or members of security forces standing in particular at bus stops, tram stations and security posts.

In January, four soldiers were killed and 17 injured when a Palestinian drove his truck at high speed into a group of cadets waiting by the side of the road in Jerusalem.

Steel bollards have been put up in sensitive areas, and there are now concrete blocks stopping vehicles from approaching tram stops.

But Harnoy said that “you can’t put concrete blocks and barriers everywhere, especially in the center of a city like London. It can’t be like a military installation”.

“To my mind, the best solution for stopping an attack is having people who know how to use arms, including civilians,” he said.

In Israel, police carry guns, it is not uncommon to see armed soldiers on the streets, and many civilians, most of whom have done army service, carry pistols. When attacks occur, video footage often shows civilians drawing weapons at the scene.

“But of course in Britain that is very difficult,” Harnoy said. “Even most police don’t carry weapons. For me, that is one of the mistakes in Britain, not allowing police to have weapons.”

Even in Israel, Harnoy is not convinced that most civilians who carry a weapon are sufficiently trained to handle an attack.

He also noted that Israel allowed its intelligence services more freedom to dig up background information on individuals than Britain, which had to strike more of a balance with privacy and human rights.

“This is a war,” said Harnoy. “When it comes to intelligence, you need 10 to 15 years of information on people, and in doing that you have to think carefully about their rights, about the balance between freedom and security.

“To implement such an intelligence system, you have to make a different balance with democratic rights.”