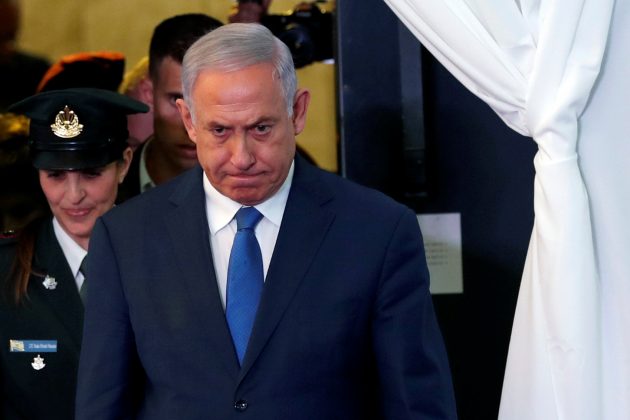 Israeli Prime Minister Benjamin Netanyahu looks on as he arrives to review an honor guard with his Ethiopian counterpart Abiy Ahmed during their meeting in Jerusalem September 1, 2019. REUTERS/Ronen Zvulun

By Ari Rabinovitch and Ellen Francis

JERUSALEM/BEIRUT (Reuters) – Prime Minister Benjamin Netanyahu said on Sunday that Israel was prepared for any scenario after a cross-border clash with Lebanon’s Hezbollah, but neither side seemed eager for another conflict.

Israel’s military said anti-tank missiles from Lebanon targeted an army base and vehicles. It responded with fire into southern Lebanon, after a week of growing tension raised fears of a new war with long-time enemy Hezbollah.

The Iran-backed Hezbollah movement said its fighters destroyed an Israeli military vehicle, killing and wounding those inside. Israel said there were no casualties.

Netanyahu, whose re-election campaign ahead of a poll less than three weeks away could have been complicated by war in the north, signaled business as usual after the hostilities erupted along the frontier with Lebanon.

The Israeli leader kept to his regular schedule, commenting on the security situation, in Hebrew only, at the start of a meeting with Honduras’ visiting president, and did not take questions from reporters.

“We were attacked by a few anti-tank missiles. We responded with 100 shells, aerial fire and various measures. We are in consultations about what’s to come,” Netanyahu said.

“I have given instructions to be prepared for any scenario, and we will decide on what’s next depending on how things develop,” he said, almost dismissively, in a departure from his usually much tougher language toward Israel’s enemies.

“I can make an important announcement – we have no casualties, no wounded, not even a scratch.”

The U.N. peacekeeping force on the frontier said calm had returned to the region at night. The United Nations Interim Force in Lebanon (UNIFIL) also said it had urged both sides to “exercise utmost restraint to prevent any further escalation.”

The two sides fought a month-long war in 2006 after Hezbollah captured two Israeli soldiers in a cross-border raid.

Israel has been on alert for a confrontation with Hezbollah for the past week after two drones crashed in Beirut’s southern suburbs, with one of them exploding. Security officials in the region have described the target as linked to precision-guided missile projects.

Any new war between Israel and Hezbollah would raise the risk of a wider conflict in the Middle East, where Iran has defied U.S. attempts to force it to renegotiate a 2015 nuclear deal it reached with world powers.

At the same time, Israel is alarmed by Tehran’s growing influence in the region through militia allies such as Hezbollah in countries such as Syria.

In Iraq, powerful Iranian-backed militias have blamed a series of recent blasts at their weapons depots on Israel and the United States.

Hezbollah said the operation on Sunday was carried out by a unit named after two of its fighters who were killed by an Israeli airstrike inside Syria last week.

An Iranian security official was cited as saying the Hezbollah attack on Sunday was “a reciprocal measure”.

Hezbollah leader Hassan Nasrallah said on Saturday night that field commanders were ready to respond to last week’s drone attack, which he blamed on Israel. But like Netanyahu, Nasrallah has not indicated Hezbollah was seeking full-scale war.

Amid the threats, Israel had moved extra forces into the border region, which was largely quiet since the 2006 war.

Without claiming responsibility for the Beirut drone attack, the Israeli military has published what it said were details about an extensive Iranian-sponsored campaign to provide Hezbollah with the means to produce precision-guided missiles.

Such missiles could potentially pose a counter-balance to Israel’s overwhelming military force in any future war, with the capacity to home in on and knock out core infrastructure sites.

Nasrallah says Hezbollah has enough of the missiles, dismissing claims that it has factories to produce the weapons.