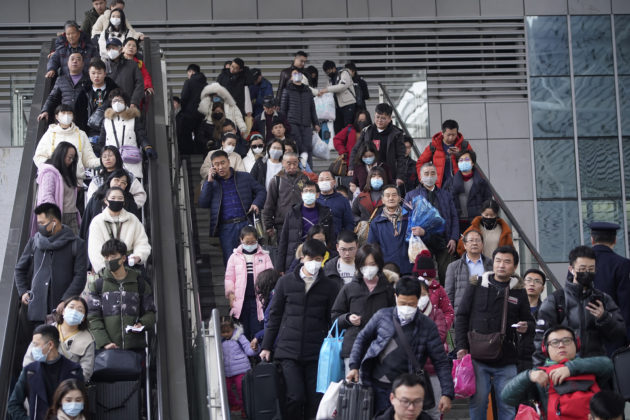 BEIJING (Reuters) – The toll from a new virus in China rose to six deaths and more than 300 cases on Tuesday as millions of Chinese prepared to travel for the Lunar New Year, heightening contagion risks.

Many in China scrambled to buy face masks to protect themselves from the previously unknown, flu-like coronavirus infection and airports around the world tightened screening.

The outbreak, which began in the central Chinese city of Wuhan, also worried financial markets as investors recalled the economic damage from China’s Severe Acute Respiratory Syndrome (SARS) epidemic in 2002/2003 that it initially covered up.

“We’ll stay at home during the holiday. I’m scared as I remember SARS very well,” said Zhang Xinyuan, who had been bound from Beijing for the Thai resort of Phuket before she and her husband decided to cancel their air tickets.

Authorities have confirmed more than 300 cases of the new coronavirus in China, mostly in Wuhan, a provincial capital and transportation hub, where it may have come from a seafood market.

Symptoms include fever, coughing and difficulty in breathing, and the viral infection can cause pneumonia.

Wuhan mayor Zhou Xianwang told Chinese state television on Tuesday six people had died in his city. The disease was spreading further around other parts of China, however, including five cases in the national capital Beijing.

Fifteen medical personnel are among those infected.

Abroad, Thailand has reported two cases and South Korea one, all involving Chinese from Wuhan. Japan and Taiwan also confirmed one case each, both nationals who had been to Wuhan.

The World Health Organization (WHO) will hold a meeting on Wednesday to consider whether the outbreak is an international public health emergency.

Taiwan, the self-ruled island that China claims as its own, set up an epidemic response center. More than 1,000 beds were prepared in isolation wards in case the virus spreads further.

In Europe, shares of luxury goods makers, which have large exposure to China, were among those declining the most.

Though the origin of the virus has yet to be identified, WHO said the primary source was probably animal. Chinese officials have linked the outbreak to Wuhan’s seafood market.

“The outbreak of a SARS-like coronavirus in Wuhan is developing into a major potential economic risk to the Asia-Pacific region now that there is medical evidence of human-to-human transmission,” said Rajiv Biswas, Asia Pacific Chief Economist for IHS Markit.

So far, the WHO has not recommended trade or travel restrictions but they may be discussed on Wednesday.. China’s National Health Commission is also scheduled to give an update at a press briefing at 10 a.m. (0200 GMT) on Wednesday.

Airports in the United States, Australia and across Asia have begun extra screening for passengers from Wuhan.

In the city itself, officials have been using infrared thermometers to screen passengers at airports, railway stations and other passenger terminals since Jan. 14.

The Lunar New Year is a major holiday for Chinese, many of whom travel to join family or have a foreign holiday.

Shanghai city’s market regulator warned it would punish speculators hoarding masks or other products used for preventing infectious diseases, according to the Shanghai Observer web publication.

Chinese travel booking platforms from Trip.com <TCOM.O> to Alibaba Group’s <BABA.N> Fliggy said they would offer free cancellations on bookings made for Wuhan, while South Korean budget airline T’way Air <091810.KS> postponed its launch of a new route to the city.

Zhong Nanshan, head of the National Health Commission’s team investigating the outbreak, sought to ease alarm, saying in footage shown by state television there was no danger of a repeat of the SARS epidemic so long as precautions were taken.