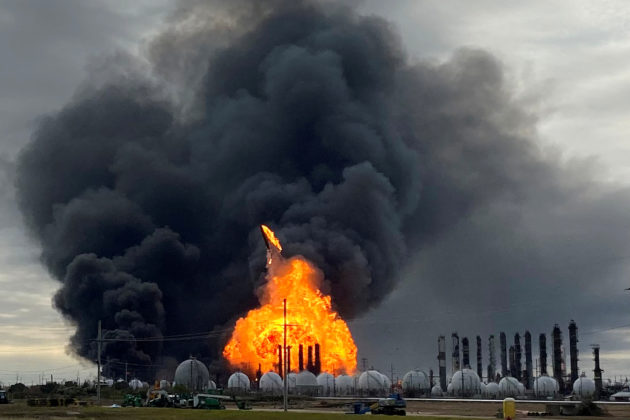 FILE PHOTO: A process tower flies through air after exploding at the TPC Group Petrochemical Plant, after an earlier massive explosion sparked a blaze at the plant in Port Neches, Texas, U.S., November 27, 2019. REUTERS/Erwin Seba/File Photo

New evacuation order for Texas city hit by explosion, chemical fire
HOUSTON (Reuters) – Authorities have issued a second evacuation order in a week for residents of a city in the U.S. state of Texas after an explosion and fire at a petrochemical plant.

Officials issued the order late on Wednesday in Port Neches after air monitors detected elevated levels of a cancer-causing petrochemical produced at the TPC Group facility that was struck by the blaze and blast.

The fire at the 218-acre (88-hectare) plant, which was put out on Tuesday after burning for six days, had earlier prompted the evacuation of about 60,000 residents from several cities in southeast Texas.

Air monitors on Wednesday posted elevated levels of butadiene, a cancer-causing chemical. The plant makes flammable chemicals used in the production of synthetic rubber and a gasoline additive.

Schools were closed for the rest of the week, officials said. Schools in Port Neches and nearby Groves had reopened on Tuesday.

TPC Group did not immediately respond to requests for information on the butadiene emissions.

The latest evacuation, issued by the City of Port Neches and Jefferson County Judge Branick, replaced a shelter-in-place ordered earlier on Wednesday.

Elevated butadiene levels had been measured in some parts of the city and could cause dizziness, nausea, headaches, irritated eyes and throat, the statement said. They did not pose a serious health risk, or a flammability or explosion risk, it said.

A local temporary shelter for residents was re-established, the statement added.

TPC Group’s Port Neches plant suffered a fire after an explosion on Nov. 27 that injured three workers. Officials have not determined the cause of the explosion and fire, which began in a butadiene processing unit.