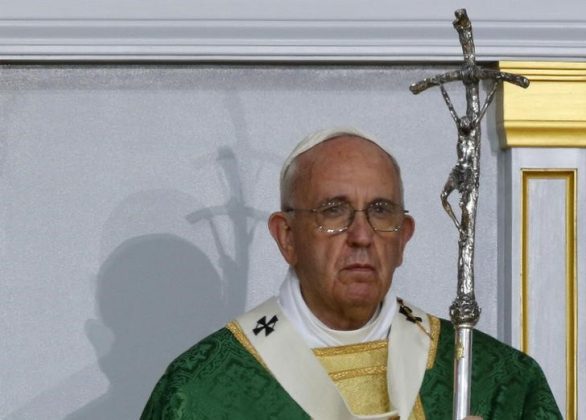 Pope Francis celebrates his final mass of his visit to the United States at the Festival of Families on Benjamin Franklin Parkway in Philadelphia, Pennsylvania September 27, 2015. REUTERS/Jim Bourg

(Reuters) – A New Jersey teen pleaded guilty to attempting to provide material support to terrorists in what media called an ISIS-inspired effort to kill Pope Francis in 2015 during a public Mass in Philadelphia, according to a statement by federal prosecutors.

Santos Colon, 17, admitted on Monday in a federal court in Camden, New Jersey, that he attempted to conspire with a sniper to shoot the Pope during his visit in Philadelphia and set off explosive devices in the surrounding areas.

Colon engaged with someone he thought would be the sniper from June 30 to August 14, 2015, but the person was actually an undercover FBI employee, according to prosecutors. The attack did not take place, and FBI agents arrested Colon in 2015.

“Colon engaged in target reconnaissance with an FBI confidential source and instructed the source to purchase materials to make explosive devices,” prosecutors said in a statement on Monday.

A U.S. citizen from Lindenwold, New Jersey, Colon was charged as an adult with one count of attempting to provide material support to terrorists on Monday and faces up to 15 years in prison.

What motivated the attempted attack was not immediately known to Reuters. NBC News reported that prosecutors said Colon admitted the terror plot was inspired by the Islamic State.

Prosecutors and the defense attorney did not immediately respond to a request for comment.

Colon also faces a fine of $250,000, or twice the amount of any financial gain or loss from the offense, prosecutors said. No date has been set for sentencing and the investigation is ongoing.

The Pope visited Philadelphia on Sept. 26 and 27, 2015, to hold a public Mass, attracting hundreds of thousands of people during his biggest event in the United States.