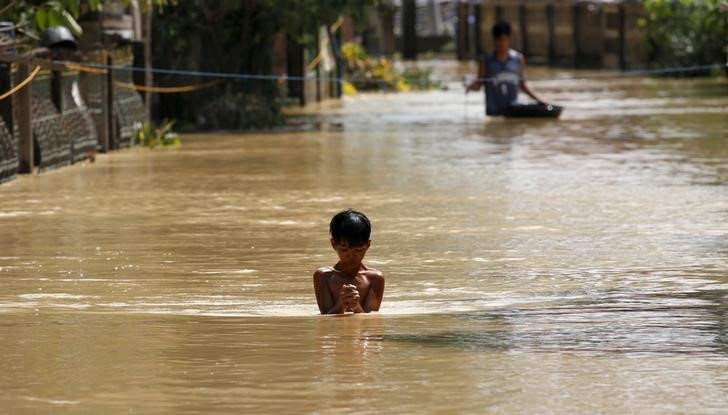 A boy wades through a flooded street in Jaen, Nueva Ecija in northern Philippines October 20, 2015, after the province was hit by Typhoon Koppu. REUTERS/Erik De Castro

BANGKOK (Thomson Reuters Foundation) – Child rights groups welcomed a new law in the Philippines requiring special emergency plans to protect children after disasters and said the legislation, the first of its kind in Asia, should send a message to other countries to follow suit.

President Benigno Aquino on Wednesday signed the Children’s Emergency Relief and Protection Act into law, mandating the government to draw up plans to ensure the welfare of children affected by natural disasters, accidents and other unforeseen events.

“We know for a fact that the children are at risk in these kinds of situations because they are helpless,” Aquino said at the signing ceremony at the presidential palace in Manila.

“We hope to make a strong foundation and basis to take care of Filipino children whoever is elected into office,” the outgoing Philippine leader said in a statement posted online.

The law clarifies the responsibilities of various government sectors, ensures children’s basic needs are met, and strengthens the government’s mandate to build evacuation centers and temporary shelters with facilities for children as well as pregnant women, he said.

Save the Children described the law as an “enormous victory for children.”

“We know from experience that when disasters strike, children are always the most vulnerable,” Ned Olney, Save the Children’s country director who was present at the signing, said in a statement.

“This legislation … ensures that children have targeted humanitarian intervention, and that government services and communities are better prepared for future disasters.”

With the law signed a few days before the first-ever World Humanitarian Summit opens in Istanbul, Olney said “the Philippines is sending a strong signal to world leaders that children caught in disasters must be better protected.”

Plan International also welcomed the law and urged the government to fully implement it.

“Children often feel voiceless in times of disasters. This victory proves that they do have a voice,” Plan said.

The Philippines is one of the most disaster-prone countries in the world, hit by an average of 20 typhoons a year.