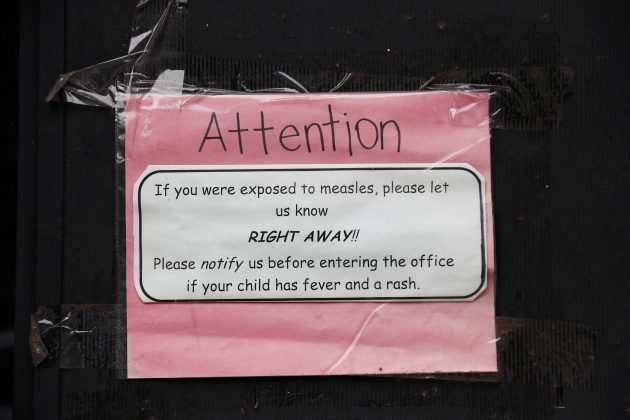 NEW YORK (Reuters) – New York City’s Department of Health defended its mandatory measles vaccination order in a state court on Thursday after a group of anonymous Brooklyn parents sued, arguing that the order was unconstitutional.

The department issued the order last week, saying it was an unusual but necessary step to contain the worst outbreak of the highly contagious virus seen in the city since 1991. The outbreak has infected 329 people so far, most of them children from Orthodox Jewish communities in Brooklyn.

The order, which was extended this week, requires unvaccinated people living in certain affected Brooklyn neighborhoods to get the measles-mumps-rubella vaccine if they cannot otherwise demonstrate immunity to measles, or face a $1,000 fine.

Five people who said they were parents living in the affected neighborhoods sued the department this week in Brooklyn’s Supreme Court, filing their lawsuit anonymously in order, their lawyers said, to protect their children’s privacy.

Their lawyers told Judge Lawrence Knipel that the city had overstepped its authority, saying 329 confirmed cases so far did not constitute an epidemic. They argued that quarantining people with measles would be a preferable approach.

“It’s excessive, it’s coercive,” Robert Krakow, a lawyer for the parents, said in court. He said he estimated that 0.0006 percent of the population of Brooklyn and Queens had measles. “That’s not an epidemic,” he said. “It’s not Ebola. It’s not smallpox.” He said even vaccinated people could spread the virus and that the vaccination carried a “risk of injury,” which the city disputed.

The department’s lawyers argued that this is a serious outbreak and that quarantining was ineffective because infected people can be contagious before symptoms appear. They said the lawsuit relied on bogus or discredited science.

Lawyers for the Health Department said three or more cases constituted an outbreak, given the United States had declared the disease eliminated in 2000, meaning it is no longer present year round. Measles can lead to serious complications and death.

“The percentage is irrelevant,” Sherrill Kurland, a lawyer from the city’s Law Department, told the court. “The rates of transmission has continued to increase. These areas remain serious for concern.”

The Brooklyn outbreak has been traced to an unvaccinated child who became infected on a visit to Israel, which is also grappling with an outbreak.

The number of measles cases worldwide nearly quadrupled in the first quarter of 2019 to 112,163 compared with the same period last year, the World Health Organization said this week, while the U.S. Centers for Disease Control and Prevention has reported measles cases in at least 20 U.S. states.

Judge Knipel said he would release his decision on whether to temporarily block the city’s order by the end of the week.