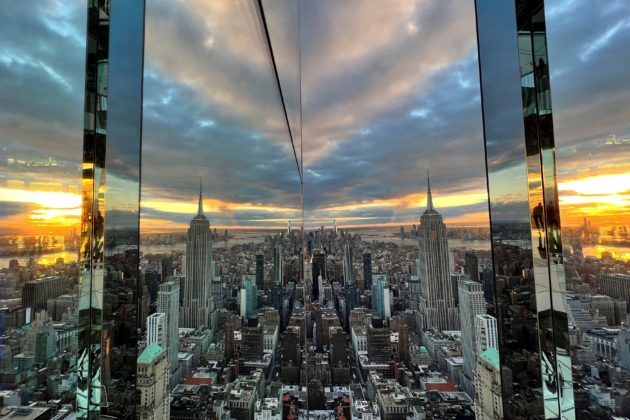 FILE PHOTO: The Empire State Building and New York’s skyline are seen during the preview of SUMMIT One Vanderbilt observation deck, which is spread across the top four floors of the new One Vanderbilt tower in Midtown Manhattan, in New York City, New York, U.S., October 18, 2021. REUTERS/Eduardo Munoz/File Photo

(Reuters) -The New York City Council is expected to vote on Wednesday to ban natural gas in new buildings, following in the footsteps of dozens of other smaller U.S. cities seeking to shift from fossil fuels to cleaner forms of energy.

Should the law pass, new buildings in the city of 8.8 million residents – biggest in the United States – will have to use electricity for heat and cooking.

In the near-term, the new law will do little to reduce carbon emissions in the Big Apple, as numerous older buildings will not be affected, and the new structures would use electricity generated with fossil fuels anyway. Longer-term, however, the state plans to stop using fossil fuels to generate power.

There are exceptions for some buildings used for certain activities, including manufacturing, hospitals, commercial kitchens and laundromats.

In 2020, U.S. carbon emissions from fossil fuels fell to their lowest since 1983, but were expected to rise about 7% in 2021 because power providers were burning more coal to generate electricity due to a sharp increase in natural gas costs.

New York’s move could mean a higher price tag for buildings using electricity for heat than those relying on natural gas. This winter, the average household in the U.S. Northeast is expected to pay $1,538 to heat their home with electricity, compared with natural gas at about $865.

Almost half of the power generated in New York State so far this year came from burning fossil fuels – 45% from gas and 4% from oil – with another 24% from nuclear power and 22% from hydropower, according to federal energy data.

The power sector’s carbon emissions in New York State should decline in the future because the state passed a law in 2019 requiring all electricity to come from clean, carbon-free sources of energy like renewables and nuclear by 2040.

“Burning fracked gas to power buildings is a main driver of climate change and air pollution, which leads to catastrophic climate events and the premature death of an estimated one thousand New York City residents per year,” Food & Water Watch and other environmental groups said in a statement.

The oil and gas industry, which opposed the proposal, said using gas for space heating would keep customer costs lower and reduce emissions especially when combined with clean fuels like hydrogen and renewable natural gas from landfills.

“Energy-efficient, low-carbon buildings could be powered by an innovative combination of natural gas and renewable energy (such as hydrogen) to both lower emissions and utility bills,” the American Petroleum Institute, an oil and gas lobby group, said as part of the city council hearings on the bill.

In Europe, meanwhile, where natural gas shortages have caused energy prices to spike to record highs in recent months, the European Union is considering whether to label gas-fired power plants as a green investment in efforts to reach climate goals.