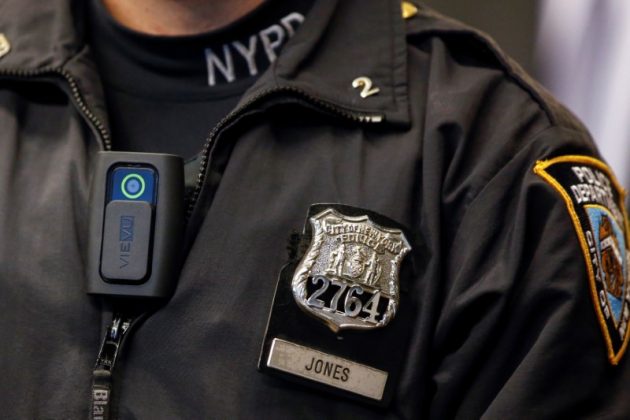 FILE PHOTO - A police body camera is seen on an officer during a news conference on the pilot program of body cameras involving 60 NYPD officers dubbed 'Big Brother' at the NYPD police academy in the Queens borough of New York, December 3, 2014. REUTERS/Shannon Stapleton/File Photo

NEW YORK (Reuters) – Civil rights lawyers on Wednesday demanded changes to a pilot program for New York City police to wear body cameras, saying it does not ensure that officers are held properly accountable for how they treat people.

The court-ordered program, whose details were approved by a federal monitor last week, was intended to precede a rollout of the cameras to all patrol officers by the end of 2019.

That came after the New York Police Department’s “stop-and-frisk” methods, faulted by critics as a means to conduct racial profiling, were declared unconstitutional.

But lawyers including Darius Charney of the Center for Constitutional Rights and Angel Harris of the NAACP Legal Defense and Educational Fund said the year-long pilot program was vague about when officers must use cameras.

In a letter to U.S. District Judge Analisa Torres in Manhattan, they said officers should be required to turn cameras on during “forcible” stops, encounters where people are free to walk away and when they are “generally” looking out for crime.

The lawyers also said the program should clarify when officers must alert people about the cameras, and that officers cannot review videos until after writing their reports or making statements, so the footage does not color their recollections.

“Details of the policy as approved by the monitor turn the cameras from an accountability tool into a tool for surveilling and criminalizing New Yorkers,” the Center for Constitutional Rights said in a statement.

Nick Paolucci, a spokesman for the city’s law department, said: “We are reviewing the plaintiffs’ submission and will respond in due course.”

The stop-and-frisk litigation helped start the body camera program in New York City, which joined cities such as Chicago and Washington, D.C., that also adopted the devices.

Such efforts were launched amid nationwide concerns about the use of excessive force by police, especially against black and Hispanic people.

The monitor, Peter Zimroth, on April 11 urged Torres to let the program go ahead without further court intervention. But the civil rights lawyers disagreed, citing a risk that police unions may try to block it in court.

New York City Mayor Bill de Blasio, a Democrat who has had an uneven relationship with the police department, favors equipping patrol officers with body cameras. He is seeking re-election in November.