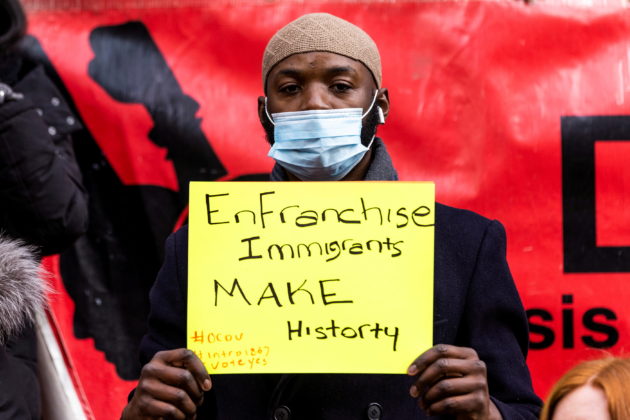 NEW YORK (Reuters) – New York City was poised on Thursday to become the largest U.S. city to allow non-citizen immigrants who are in the country legally to vote in municipal elections.

The City Council was set to enact a measure that would enable more than 800,000 permanent U.S. residents, or green-card holders, and other legally documented non-citizens to take part in elections for city leaders, including the mayor. Non-citizen residents would not be allowed to vote in state or federal elections.

The bill, which was sponsored by Council Member Ydanis Rodriguez and has the support of Speaker Corey Johnson, would require immigrant voters to have lived in the city for at least 30 days. It has the support of a veto-proof majority of the 51-member council.

Mayor Bill de Blasio on Wednesday reiterated that he has “mixed feelings” about the measure, saying there are “outstanding legal questions” about whether the city has the authority to enact such a measure.

“But I respect the City Council,” de Blasio told a reporter at a briefing. “My assumption is I’m just going to respect whatever they do.”

A report last year by the mayor’s office estimated that nearly 10% of the city’s 8.8 million residents were green-card holders or other immigrants with legal status.

At least 14 U.S. cities, including San Francisco, already allow non-citizens to vote in their municipal elections.

Supporters of the bill say it would enfranchise a huge bloc of legal residents who currently have no say over the taxes they pay, the schools their children attend or the other services they rely on.

The bill is opposed by the tiny Republican minority on the council, who say it would dilute the voting power of citizen voters and discourage immigrants from becoming citizens.

Council Minority Leader Joe Borelli the measure would make voting requirements in the city more lax than the home countries of many immigrants, and would enable them to vote in elections in both countries.

“If the champions of this bill really care about our democracy, they would encourage immigrants to strive toward American citizenship — not cheapen it by giving away the store,” Borelli said in an opinion piece in the New York Post last month.